How AnthroCon Wrecked My Closet
​
by Mark Zubrovich

​The views and opinions expressed in this article are solely those of the author. They do not reflect the opinions or views of Bunker Projects or its members.
Most straight folks have a difficult time understanding the scope of “the closet” in queer vernacular. Even the most well-meaning allies tend to conceptualize it as this singular thing you can triumph over; you struggle with it, you fight valiantly against it, then you’re out and now you’re free. Congratulations, you killed the beast!

In actuality, it’s much less linear and much more pernicious. In my experience the closet functions not as a binary — you’re in or you’re out — but as a spectrum; an ever-present gauging of how visible your queerness can safely be. You’re always sitting somewhere on that spectrum, every interaction becoming a process of coming out or not coming out. The closet can manifest as severely and as all-encompassing as a lifelong denial of your sexuality or gender identity, or as minute as a split second of self doubt:
Did I say that with too much of  a lilt in my voice? Should I tone that down?
Is it cool to say that I have a boyfriend, or should I start with “I’m dating someone” first?
​Is anyone gonna take me seriously if I wear this outfit? Do I look silly?
It’s a defense mechanism, and there can be necessary safety in that. But it can quickly turn to morbid paranoia and self loathing. There’s a fear and emotional labor that comes with this inner dialogue coloring your everyday life, and boy is it exhausting. For me, “coming out” in the macro sense has been a process of shedding that fear, discarding the knee-jerk compulsion to hide and obfuscate. The inner dialogue never really goes away, but you can become unshackled by it. 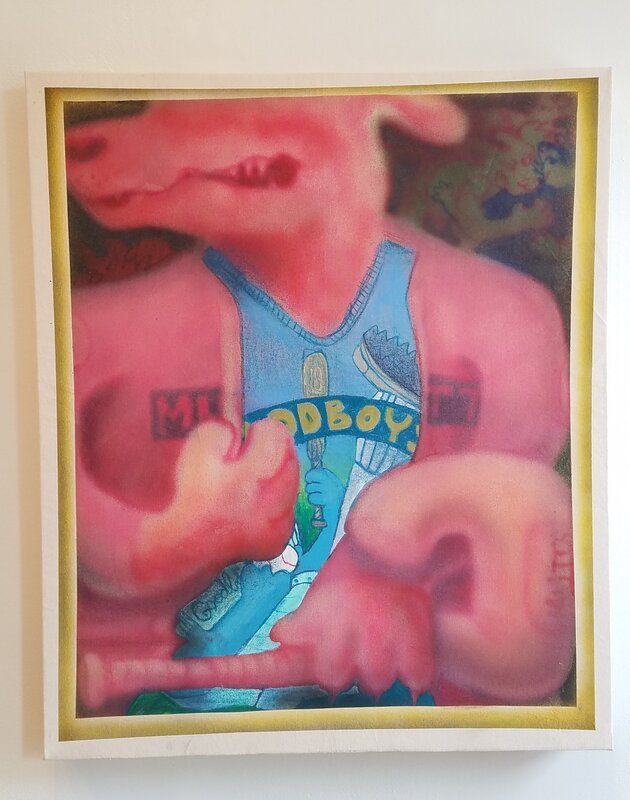 Mark Zubrovich, Turncoat​ (2019). Installation shot at Bunker Projects.
“So, are you a furry?”

That question used to make my palms sweat. It came up more than once at my Pittsburgh residency with Bunker Projects in the spring of 2019.  My work there was expanding upon a years-long painting practice centered around anthropomorphic dogs that play baseball. I’d arrived at this work through my inability to integrate into the heteronormative culture of sports fandom, despite being a lifelong Mets fanatic. This series was a way to break down that barrier by queering something so prohibitively macho but so enticingly homosocial. So masculine but so tender. I had a desire to carve out a place in that world for my own strangeness, to make it gay and cuddly and doggie and free to sniff and lick without apprehension…  But IN NO WAY was that a FURRY thing! When that question came up, I could feel the closet sitting in my guts like a rock:

Do I want my practice to be associated with that weird subculture? Is my art only about fetish?
What will these new friends think if I welcome the association?  What will my FAMILY think?
​Will the art world take me seriously? Do I even take myself seriously? Do I look silly?

These anxieties race through my head in an instant, and suddenly I’m bloviating like a politician: “I’m furry adjacent! No real link to the fandom, but they’re very inspirational. A wonderful aesthetic. I can see why you’d make the connection. I’m not one though!!!”

Well, people can change a lot in three years.

Independence Day Weekend  2019 I was too afraid to officially register at the David Lawrence Convention Center. My residency was successful and finished. It was my last two days in Pittsburgh. And even though the world had lined up perfectly for me to be there, I could not bring myself to go in. Instead I stood outside, heart in throat and rock in stomach, and watched as thousands of animal costumes marched through downtown in the AnthroCon Fursuit Parade, as I snapped photos from a distance as they waved to onlookers and high-fived excited children.

In 2022, my partner was taking the photos; I was too busy marching in my fursuit. My fursuiter badge, a special marker given to con-goers in full costume, is numbered #1050 out of around 2500. What animal do I prefer to be? I’ll keep that private for now. Ok, one hint: I’m not a dog. At least, not until I make my dog suit. But I am a species that dogs hunt!

In case it wasn’t obvious, I’ve been a furry the whole time. I've had an affinity for it since adolescence, but only recently have I had the courage to fully step through that door. Many of the new friends I made at AnthroCon 2022 were the same, first-time attendees watching from a distance until the need to be authentically weird overrode any fear. And believe me, the weirdness envelops you like a bearhug when you finally enter that space (pun absolutely intended). This year’s convention, spanning three days and 9700 attendees, had all the exuberant eccentricity you can imagine and more. A marching band made entirely of fursuiters. A roving gang of roadkill opossums starting dance parties in the halls. A vendor selling fudge shaped like dog treats. A late night rave with a life-size blowup deer being thrown about the crowd. Hours long panels for enthusiasts of sexy werewolves or sentient pool toys.

It’s natural that outsiders see the furry community as, at best, idiosyncratic and a bit silly. At worst, it’s weaponized by conservatives to stoke modern day gay panic, presented as a sure sign of degenerate societal collapse. Either way, there’s an image of furry as an unabashedly, sometimes uncouthly kinky subculture. I will make no efforts to cleanse that assumption, because it is absolutely true. AnthroCon has muzzles, harnesses, leashes, and straps. Horses with big breasts, tigers with bulging underwear. And more naughty illustrations and dirty comic books than you could fit in your suitcase. This is a feature, not a deviation. Sensuality is a prominent and integral part of the larger whole. Like me, so many of the new friends I made at AnthroCon grapple with mental illness, social anxiety, and gender identity issues. Its an OVERWHELMINGLY queer subculture, with trans nonbinary and rainbow flags dominating the con space as much as the brightly colored animal suits. Everyone around you is some flavor of misfit. And we’re all happy to see each other’s fuzzy faces.  At AnthroCon, the closet dissipates. There is no fear in the dialogue. I’ve got my mask. My “fursona”. I look silly. So do you.

Clearly there is plenty of raucous fun at AC! There are also friends crying in each other’s fuzzy arms because they’d never met in person before now, or haven't seen each other since the pandemic. There were couples proposing on the waterfront. There was a charity drive that raised $41,000 for an animal shelter. On Saturday there was a block party after the Fursuit Parade, where Penn Avenue was shut down and hundreds of yinzers came to welcome the furries back after a rough two years. A local news headline that day read “Nature Is Healing: The Furries Are Back”, because Pittsburgh in particular has embraced and made welcome this fiercely loving and radically strange community. I’ll be back in town for Independence Day 2023. 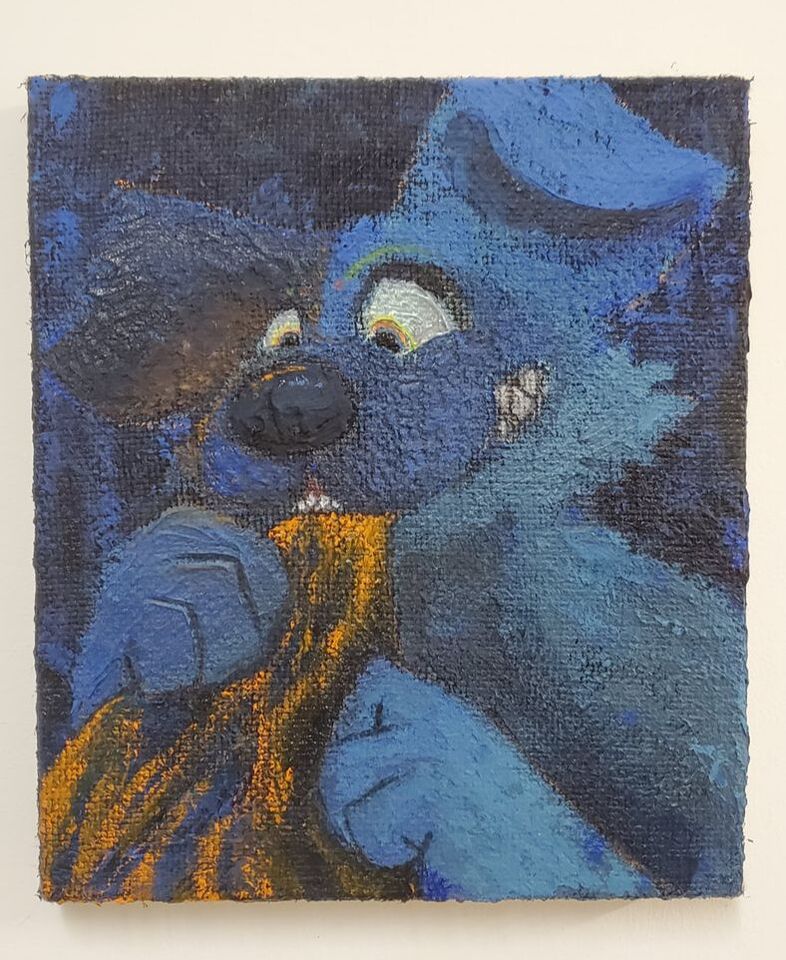 Mark Zubrovich, Bruce Bites (2022)
The spring of 2019 felt, in many ways, like jumping into water without knowing its temperature. My childhood home had just been sold. I had quit my job to throw myself headfirst into artmaking. I was still grieving the death of my closest friend, who had been driven to alcoholism by, amongst other things, the pernicious self-hatred of the closet. (He used to tease me about being “a secret furry”. I would vehemently deny it.) My coming out process was already well in motion when I arrived in Pittsburgh that year, but it was unstoppable by the time I left. I mention at the beginning of this piece that when the closet holds you back it can feel like safety, a defense against potential violence. But as it protects you, it suffocates you. I’m reminded of late music producer and trans icon SOPHIE’s track where she asks the listener repeatedly “Is It Cold In The Water?” I did not find out until I jumped.

Since my time at Bunker I’ve continued to paint my dogs, and the work has grown more and more puppy, more kink-forward, more free to lick and sniff at will. There’s no single turning point between then and now where I was no longer afraid of being openly furry, or having my work be associated with it. It might have been in 2019 outside the convention center with my camera. It might have been a few months after, when I met my partner. If anything, writing this piece has made me realize that I’ve still not fully shed that anxiety. But I can say for sure that a major tipping point was around the fall of 2020,  when I left the baseball allegory behind in my artwork. At the height of the pandemic, when everything felt like it was on the edge of collapse, the pressure to queer something as enormous as sports culture felt not only futile, but unnecessary. There was no longer a need to prove anything, no need for a metaphor: life is short, just be the creature you are. I’m still madly in love with baseball (I am writing this sentence the day after losing my voice at a Mets game) but if it ever resurfaces in my work it will be part of the larger fabric, another element in my universe. As it turns out, my dogs speak on their own as queer vessels. And so do I.

Mark Zubrovich, Dogball Patch (2019). Installation shot at Bunker Projects.
Mark Zubrovich (b.1992) is a New York based artist born on Long Island. Their father is a deacon in the Catholic church, and their mother works for a corporation that makes and distributes Halloween costumes. He graduated with a BFA from Purchase College of Art and Design in 2015, and has shown locally and internationally since. He was artist in residence at Bunker Projects in 2019, and was most recently resident artist at the Liquitex studios in New Jersey. He currently lives in Brooklyn with several houseplants (no dogs currently).