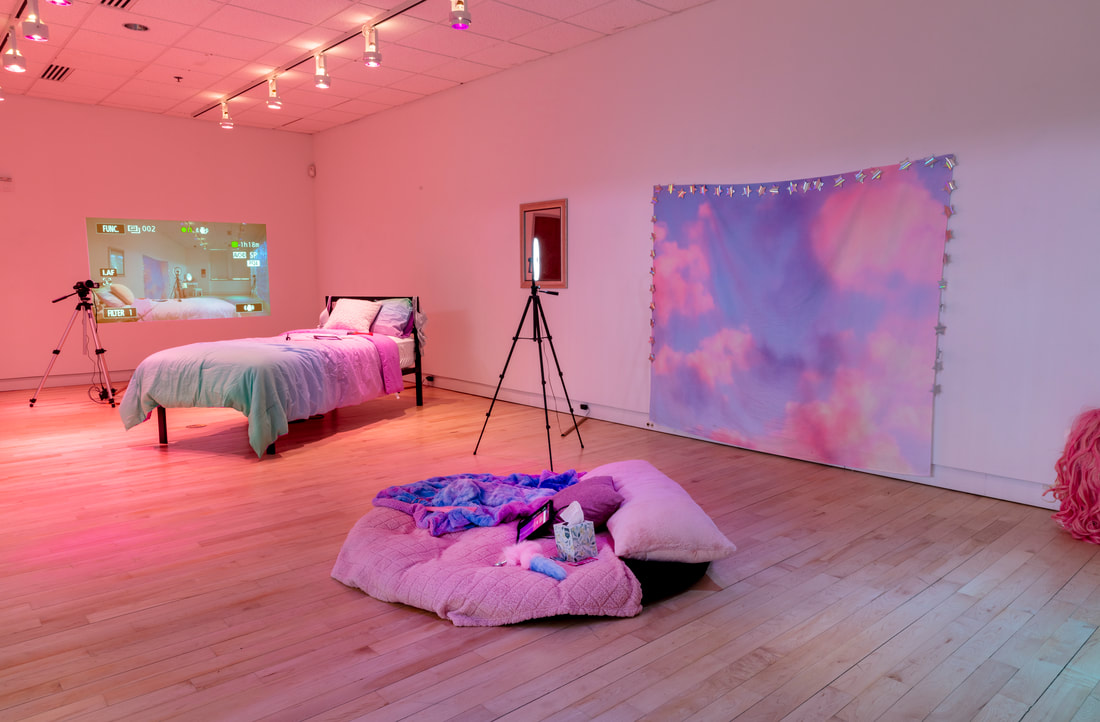 04/17/2022
Edited by Harrison Smith and Anna Mirzayan | Images by Tom Little
​
​The views and opinions expressed in this article are solely those of the author. They do not reflect the opinions or views of Bunker Projects or its members.
A few weekends ago, I visited the ICA Miller to attend Camopticon Live​ (all works 2022), a performance featuring Kiko, an Irish webcam model broadcasting from her bedroom. The show was held inside of a peep show structure — three walls and a curtain that can be pulled closed. Inside, I was surrounded by Kikos — recorded performances of her, and a physical laptop streaming Kiko’s live performance, dressed in lingerie and wearing a plastic bunny mask. I turned on my webcam so she could see me and we could interact face to face.

Though the peep show structure created the semblance of privacy, Kiko and I were simultaneously projected on the outside for the audience to view. I could hear the audience reacting to my interactions with Kiko, laughing as they watched me choose an emoji to react to her using nipple clamps (I settled on one where the eyeballs roll in a circle). When I politely thanked Kiko for her time, giving other people a turn to interact with her, people outside were giggling. “You are so formal!” my friend said to me, teasing. 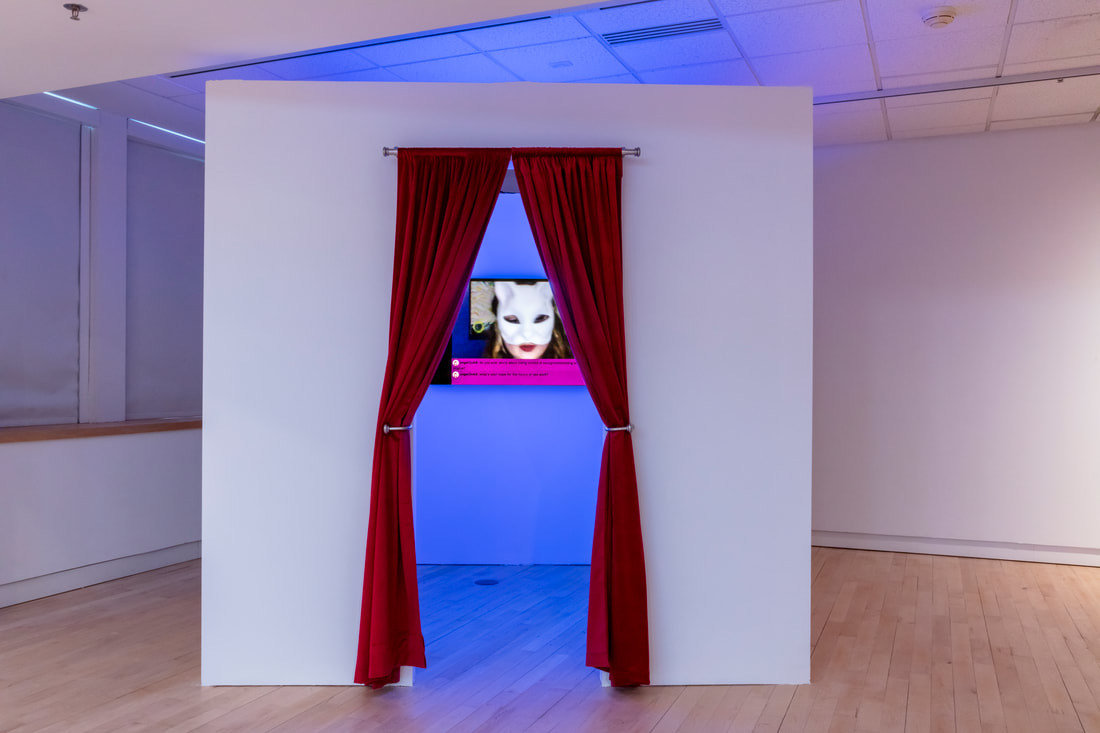 Lena Chen, Camopticon (2022)
Camopticon Live is a part of Lena Chen’s exhibit in Untitled Affairs at ICA Miller (March 26 to April 17), an extension of Camopticon, the multi-channel video installation of Kiko. The show also includes a cam worker’s bedroom studio and the online game OnlyBans, which you can play on multiple devices in the room. The bedroom is full of hyper feminized objects — makeup at the vanity, the recursive color pink, lingerie on the floor. The bedroom is as much a stage as it is an intrusion — the domestic intruding on the sterile gallery space. Condoms and sex toys are strewn on the bed. The walls include an assemblage of different mirrors and projections of subjects in the bedroom. I couldn’t help but seek out my own image — my own vanity a technology of surveillance — and then the source of the images, whether a webcam or a camcorder. What was the thing that urged me to confront myself? While the space holds the invitation to be performing, I found that the more time you spend in the bedroom, the more comfortable you make yourself, sinking into the fluffy bean bag with your entire weight. Despite the cameras, it is easy to relax when there is a soft surface to lie your head on. 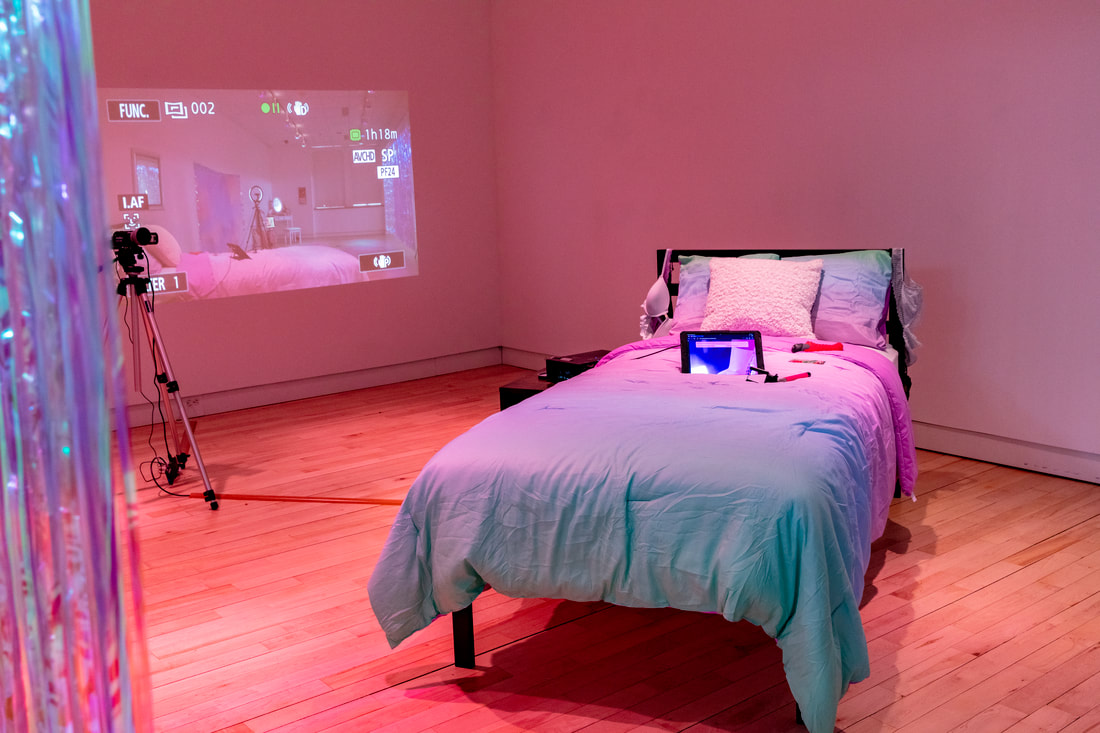 Lena Chen, OnlyBans (2022)
The OnlyBans game positions you as a sex worker who must make $200 in six weeks. The game replicates the obstacles digital sex workers face — from algorithmic bias to shadowbanning to deplatforming. When a social media platform deems content “inappropriate, high-risk, or low value,” it can use a shadowban, allowing users to post but making the content invisible to other users; or it can altogether deplatform the user, blocking them entirely from the site. 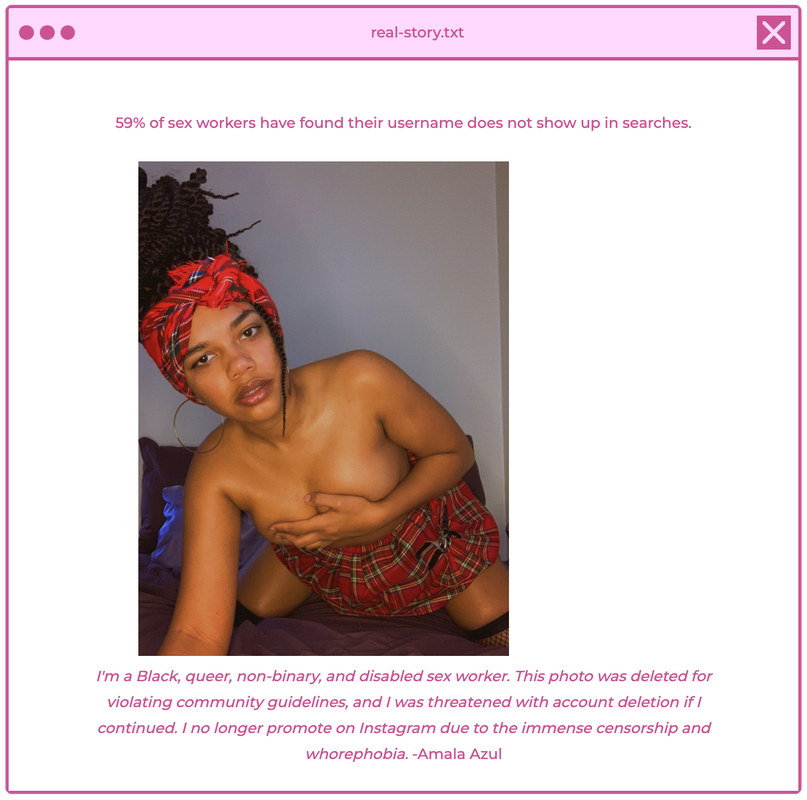 Digital game still, OnlyBans (2022)
The game makes explicit how reliant online sex workers are of visibility to protect their financial security, and the asymmetrical power that platforms have to regulate the feed. By week three, you have to make yourself legible to the state by verifying your legal name, your phone number, and submitting a photograph of yourself holding a state ID; otherwise, you have no way of collecting money and immediately forfeit the game. And then there are the ways the algorithm acts on the body, defining what is and isn’t “allowed” on the platform. One sex worker who is AMAB (assigned male at birth) describes how the more feminine they present, the more censorship they experience.

Visibility for sex workers is certainly dangerous – it can mean being at risk of online harassment or being outed to employers or family members. Yet a lack of visibility can be costly. It can mean losing an income stream or a creative expression that gives your life meaning and joy. OnlyBans places you right in the middle of this tension. You love the camera and the camera loves you, the game tells you.

Feminist writer Sharon Marcus says in conversation with Nancy Princenthal, “it’s very aggressive to expose yourself to the public. We usually experience someone exposing themself as something of a threat” (Princenthal 46). Perhaps the threat is “I can do this, you can’t.” Or, “I am comfortable with my body.” This threat is exacerbated when you possess a body that isn’t cis or white — when you possess a body that isn’t normative. As sex workers try to create the conditions under which they can survive, they are perceived as a threat, one that is met with the full force of censorship, violence, and incarceration. 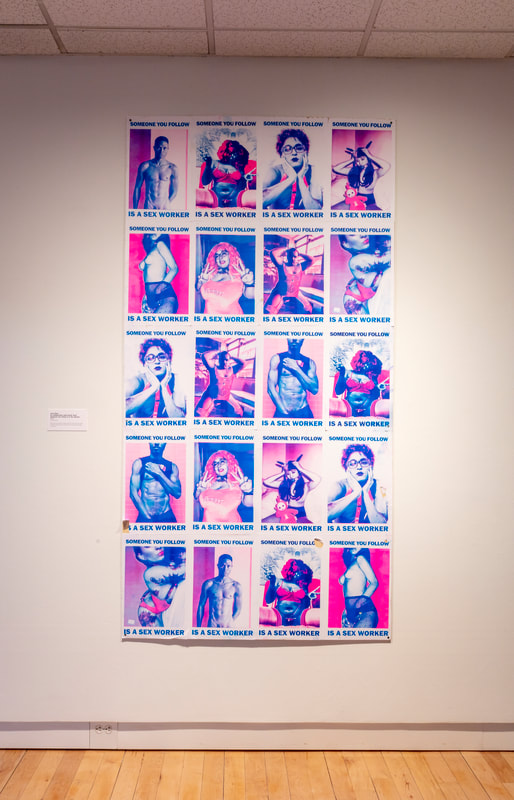 Lena Chen, Someone You Follow Is A Sex Worker (2022)
Someone You Follow is a Sex Worker is a series of risographs with the titular slogan printed underneath previously censored images of online sex workers. These prints are explicitly for the purposes of redistribution and activism, and the slogan is a reminder that we co-produce the algorithm’s gaze as social media users. We submit to and participate in what we decide we want to see, reproducing racist and ableist definitions of desirability.

When I was in the peep show structure with Kiko, I became aware of my own vulnerability and the ongoing decision-making of wanting and not wanting to be perceived. I suppose I wake up every morning and look in the mirror, imagining how I might be seen, and then make that decision. And yet the stakes are lower for me when my livelihood isn’t inextricably wrapped up in this question. I want to be desirable, but I’m not paid to be desirable.