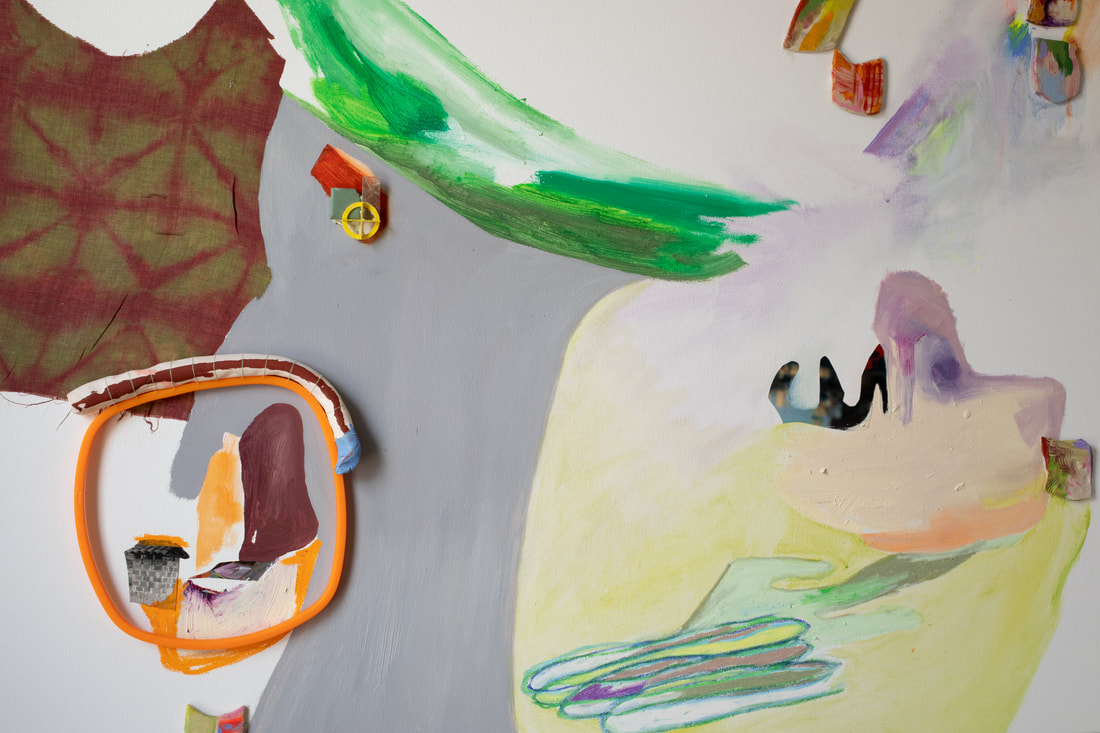 Finding the Body on the Grid​

Review in absentia
​
by Elina Zhang

​The views and opinions expressed in this article are solely those of the author. They do not reflect the opinions or views of Bunker Projects or its members. All images courtesy of Bunker Projects.
There was a week or two when I lived in New York, commuting every day to and from work on the subway, where I would list off emotional antonyms — emotions that were associated with being oppositional — in my phone notes:

My time in New York pulled me in all these directions, and at times I surprised myself at how much one body could hold. Sometimes it was the subway that shuttled me between these emotions — a meaningless, soulless job in a windowless office to an apartment rich with friends cooking food you could smell a block away.

I am charmed by the concept of an antonym, associating it with childish and preliminary forays into language. Second grade worksheets with lines drawn between the words happy/sad and sunny/rainy and good/evil. The word antonym itself, which has the Greek root anti- or against, implies that there can be something metaphysically oppositional about two words, in experience and in origin; that two words are at odds; that they are zero-sum and the presence of one makes the other impossible. In poet Lyn Hejinian’s essay “Rejection of Closure,” she tentatively offers up the antonyms “open” and “closed.” And while a closed text rejects ambiguity, the open text “often emphasizes or foregrounds process” and is aware enough of the risk of commodification to resist it. 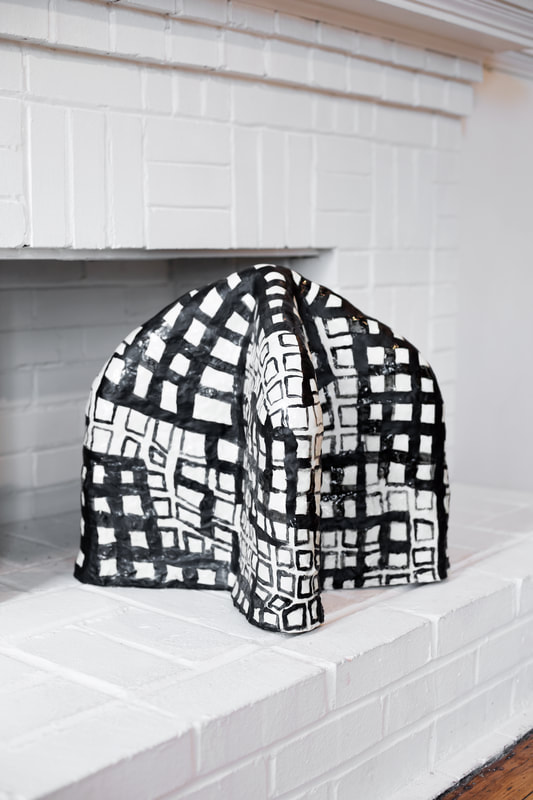 The open text comes to mind when I first look at the works in Eva Conrad’s earlier solo exhibition, if the grid repeats, at Bunker Projects. My perception is made childish and guileless. Pieces that appear heavy are actually hollow, something that ceramicists experientially know (it would take forever to fire a large solid piece). Objects that appear flat hide another dimension, what Conrad referred to, in my conversation with her, as “dimensional deception.”

Conrad’s works are all bereft of a title. Like many of her other pieces, this black and white ceramic, the pattern like a net, can’t be seen in completion from any one angle. Instead, you have to arch your head, extend your neck, and even then, it eludes, resisting legibility. Though hollow, its four limbs anchor it to the ground like a body with gravity.

​The grid repeats throughout the exhibit, like a net that catches you when you fall, or a net that ensnares you like prey. In one mixed media painting, the grid appears to be actual netting, of varying size gaps, resembling the kind citrus fruits are sold in. The netting is overlaid onto the painting, over a checkerboard pattern that is painted. The layers warp the plane, creasing as if in movement. 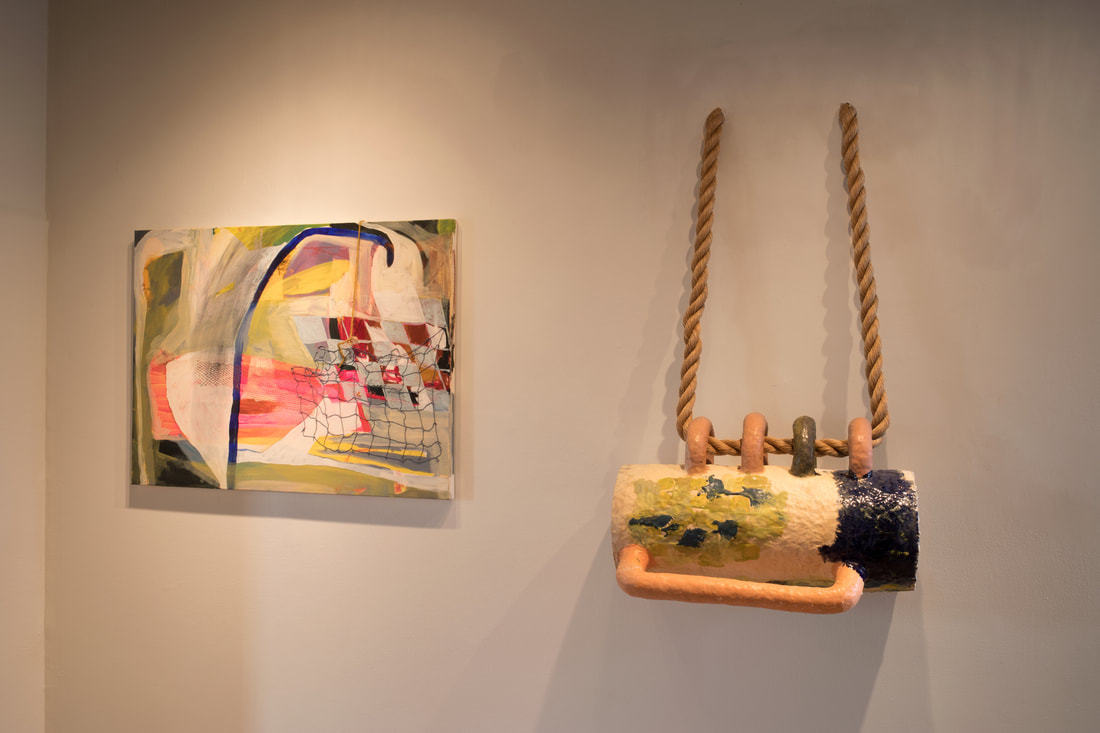 In a ceramic vessel that is strung up to a wall horizontally, the net’s “strings” are also clay, concaving into the vessel. It is an object that lets us look inside: the decision to suspend it by threading a rope through the “handles” allows us to peer into the vessel at eye level, through the net. The pieces build on each other, an internal vocabulary you learn over time. 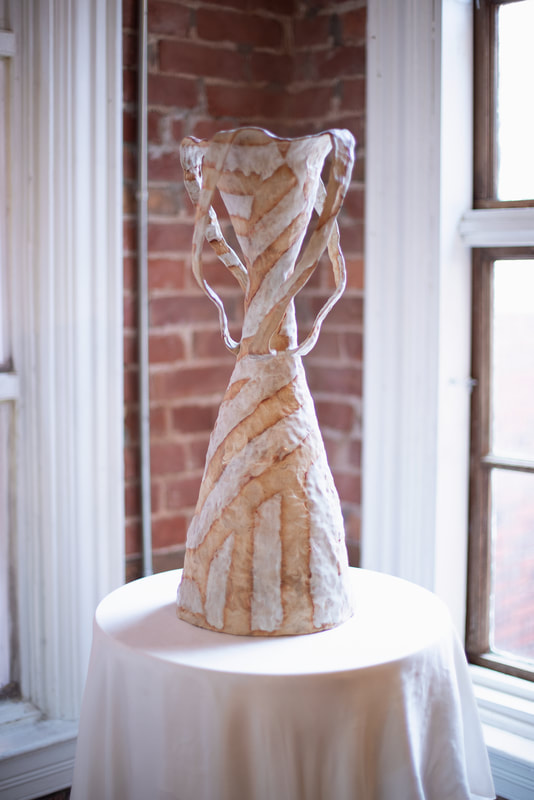 Inspired by “Dazzle” or “Razzle Dazzle” ship camouflage, a wartime technology invented during World War II, this piece wiggles and warps the space around it. Dazzle camouflage historically aspired to not conceal the object but rather “dazzle” the viewer, causing the enemy to take up a poor firing position. In the installation, Conrad has the piece rotating on a table, the movement drawing the viewer in.

​It is clear from the way this piece draws you in that objects are not so guileless. There is a cunning behind each object, even a seductiveness in their demand to be perceived. And the more you look, the more dazzled you are. To be dazzled is to be disoriented, not just by an object’s place in space but your own body in space. With its spindly arms rotating, blending and disrupting the body of the piece, the object has its own choreography, refusing singularity.

Conrad’s work asks: “where does the body belong in the grid?” It is clear that Conrad’s work has the skill of embodied experience — making way for the kind of play that is only possible where there is both intuition and risk. Patterns are only used to be abandoned — you get used to one just long enough for it to be disrupted. Color takes on the qualities of the form that it coheres to: you can see the way the glaze melts into the nooks and crevices of the object. As gravity gradually pulled the color down, it diluted its boldness. It is there that you can also see time embedded in the object. 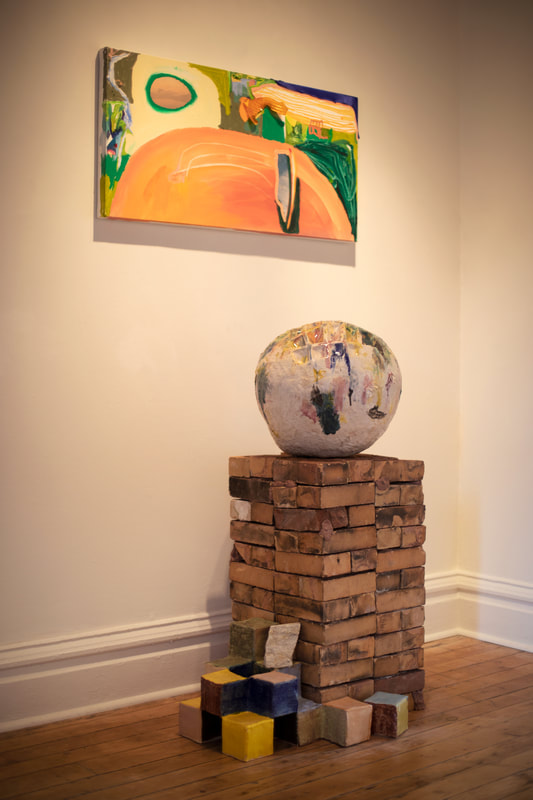 ​Perhaps there is a riddle here! Or just an answer to something I want to understand about my body’s relationship to emotions. What about the emotional landscape allows us to experience emotions that feel so fundamentally dichotomous? Putting the body on a grid initially seems brusque, forceful, like mandating an adherence to a fixed system. But Conrad’s grid isn’t fixed. If anything, this piece shows how binaries make way for duality. This is how I understand my own ability to feel loneliness and connection, or alienation and belonging.

​How the same part of me that is a convex is also a concave; how I am made hollow so that I can be rounded out. Conrad’s repeated grid, rather than unifying the exhibit, challenges any first reading. Sometimes you can look through the grid, sometimes the grid obfuscates. If the grid repeats, a meaning is set into motion.
Elina Zhang is a writer and organizer based in Pittsburgh, PA. She is currently writing about gendered violence and unruly desires. You can find her on Twitter @thirteenpints.