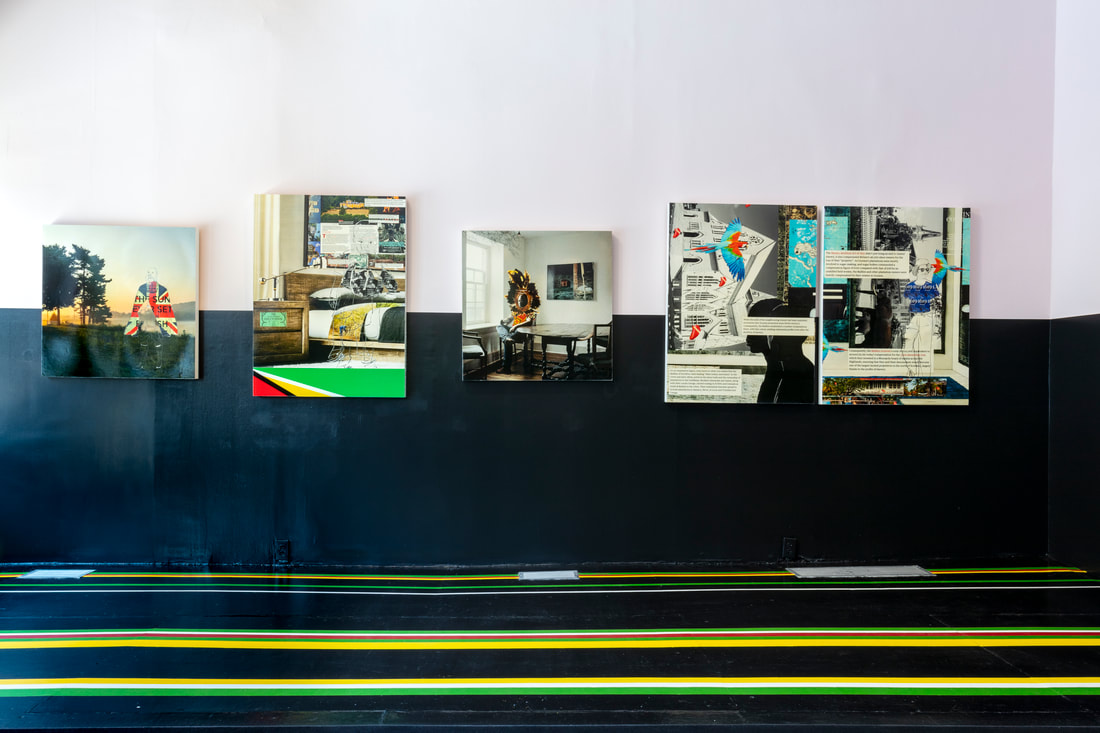 At the Door: Placemaking and Memory at the Mattress Factory
​
by Jurgis Viningas

11/22/2021
Edited by Anna Mirzayan | Images provided by The Mattress Factory
​
​The views and opinions expressed in this article are solely those of the author. They do not reflect the opinions or views of Bunker Projects or its members.
The Mattress Factory’s latest exhibition, making home here (2021)  (curated by Sean Beauford and Sylvia Rhor Samaniego) brings together five emerging local Black artists who offer us a collective attempt to articulate the various meanings of home. But these artists also deal, each in their own way, with the phenomenon of not being at home, whether in an existential, political, or straightforwardly material, sense of displacement and devaluation.

​To begin with, the theme of devaluation of Black life is explored by Gavin Andrew Benjamin and Harrison Kinnane Smith in their otherwise different exhibitions. Benjamin, a Guyana-born artist, grapples with this theme through a series of mixed media collages in his exhibition “Living in Eden” (2021). In it, Benjamin is addressing the persistence of Scotland’s historical amnesia apropos Guyana, Britain’s former slave colony, and the country’s unwillingness to reckon with the fact that slavery fueled its industrial revolution and sedimented the wealth of its Highland elite. Against the depth of this amnesia, Benjamin brings into relief the poignant historical facts by juxtaposing the narratives of social death – for example, extracts from newspapers’ articles recounting the history of habitual floggings in the colony – with the pictures of lavish Georgian and Victorian houses from the Highlands. This juxtaposition is, of course, strategic for another reason – it aims to invalidate any feelings of admiration or expressions of aesthetic valorization one might have towards these architectural monuments.

For the same critical purpose, Benjamin also intersperses his collages with important visual references to Black American culture: for instance, a repeated variation of the cover image of “The Miseducation of Lauryn Hill” (Hill’s critically acclaimed solo album), or a photo of Gill Scott-Heron bearing the title of his canonical poem “Whitey on the Moon.” Benjamin’s critical move here is rather subtle, but the point that Benjamin tries to convey is unambiguous: just as Scott-Heron aimed to ridicule our awe for the space program ((I can't pay no doctor bill/(but Whitey's on the moon)/ Ten years from now I'll be payin' still/(while Whitey's on the moon)), so Benjamin tries to submit European cultural pride and aesthetic values to a sardonic critique. 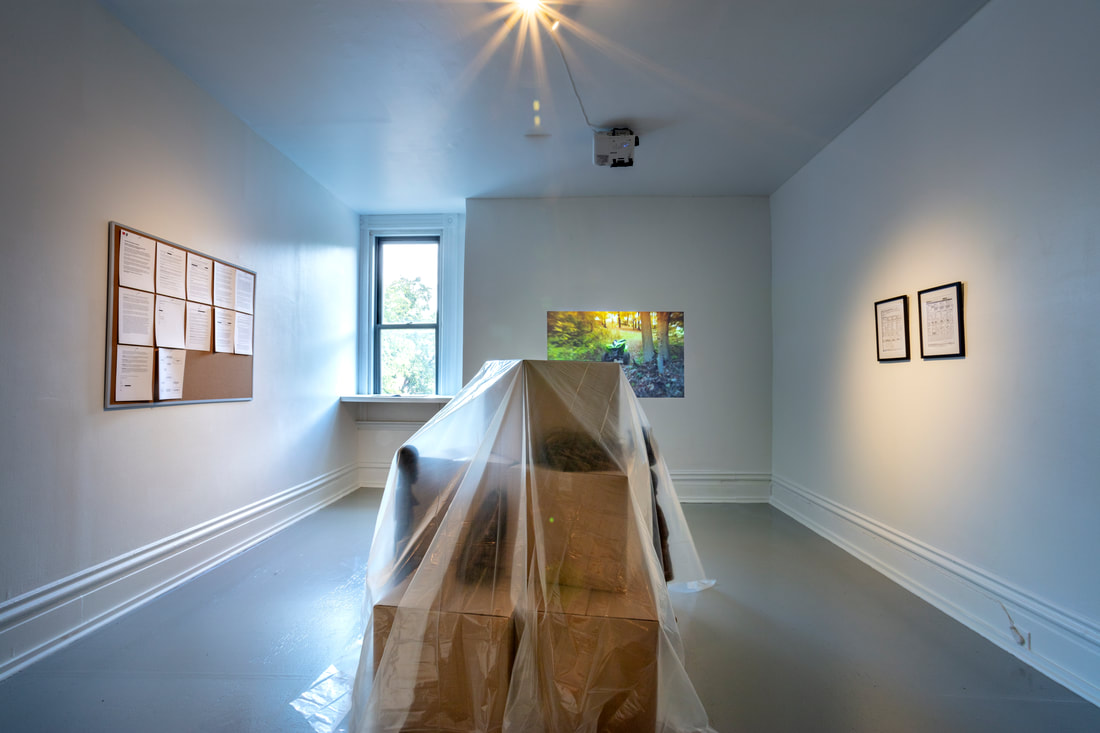 Harrison Kinnane Smith, “Sed Valorem (Market Hedonic Pricing)” (2021), Installation view at The Mattress Factory
Harrison Kinnane Smith also performs a powerful institutional critique in addressing devaluation and effacement, albeit in a different context. “Sed Valorem” (2021), the title of Smith’s exhibition, is a critical inversion of the Latin term ad valorem (meaning “according to value”) used in designating taxes based on an assessed value of property. Utilizing the prefix sed (“without” or “apart”), Smith is calling attention to the devaluation of Black subjectivity by a systemic underassessment and over-taxation of black-owned property in comparison with white-owned property.  In “Sed Valorem,” Smith links racialized economic infrastructure and the issue of effacement through a nexus of disparate objects: a folder with a study of property tax regressivity and racial inequality in Pittsburgh; an escrow account set by the museum for a Black homeowner from the Northside, intended to be used in covering any potential excessive tax payments for the next 15 years; an audiovisual projection based on an episode of MTV Cribs featuring the rapper 50 Cent and his 50,000-square foot Connecticut mansion (which he subsequently sold at a $1.2 million loss). 50 Cent’s body is blurred, posing as a vague trace of 50 Cent pre-bankruptcy, directly bringing to the fore the relation between economic devaluation and total effacement. However, one should be circumspect in approaching Smith’s work with the usual conceptual tools, which often fail when trying to make sense of the complexity of racist dynamics of American capitalism.  The nexus of different objects with which we are presented here is one of divergent lines that resist neat conceptual distinctions. 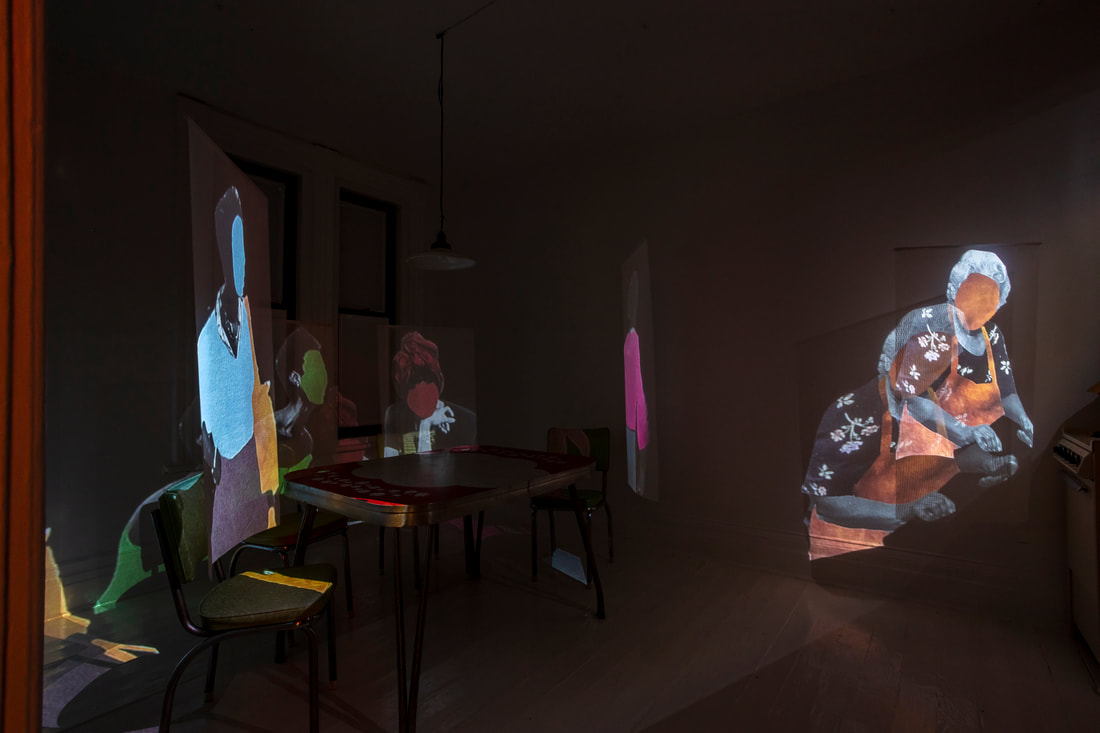 Njaimeh Njie, “Did you get everything?” (2021), Installation view at The Mattress Factory
The theme of displacement and devaluation is brought into tension by Njaimeh Njie in “Did you get everything?” (2021), and Naomi Chambers in “Black Community Survival Conference Tea Party Ice Cream Social Moonlit Cinema” (2021). Njie and Chambers engage in different projects of salvaging, cultivating, and celebrating the singularity of Black life that never allow themselves to be fully absorbed. Njie aims to document, preserve and define Black experience by celebrating the mundane in a way that circumvents the dominant white narrative about the working-class history of Pittsburgh.

​Njie’s installation is centered around a Black experience of leaving home, of relocating. We are presented with details of a kitchen interior, a carton box containing unspecified belongings, and a suitcase filled with vinyl records. The space is interspersed with projections of bodily figures caught in various gestures, their faces painted over, and an audio recording of Njie’s family members (their voices, likewise, somewhat muffled), sharing their views on the meaning of the kitchen space. While the title of her installation has a subtle critical undertone (“did you get everything you wanted from displacing communities?”), the primary aim here is to document a memory, and insist on its irreducible, if vanishing, remainder (“did you get all your memories?”). Unlike in Smith’s work, the aim behind blurring out the faces is not so much to bring to the surface the critical theme of devaluation and effacement of life, as to simply bracket the details in inviting us, to the extent it is possible, to enter into pure memory. The toning down of the details here is not aimed at conveying the presence of absence (like in  Smith’s audiovisual projection). Instead, what is affirmed here is the emotional intensity of a memory that resists effacement. Njie conserves the emotion of an event in the auditory and visual matter, in an attempt to salvage it from the obscuring flow of time and from human inattention. 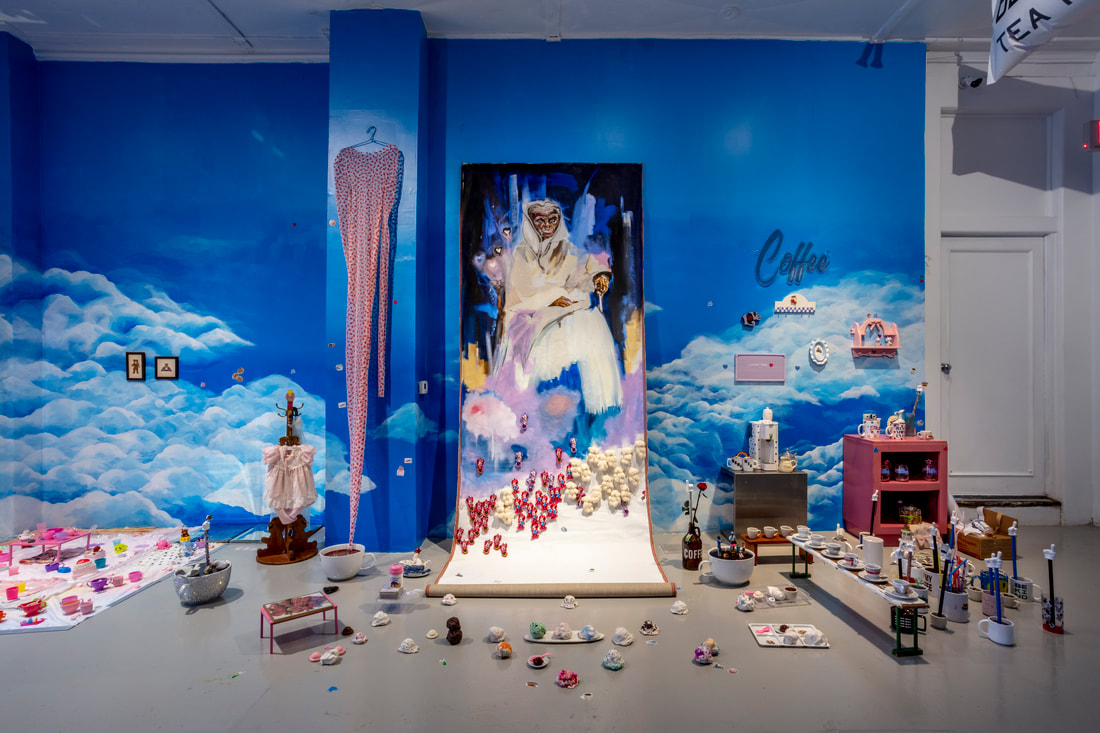 Naomi Chambers, “Black Community Survival Conference Tea Party Ice Cream Social Moonlit Cinema” (2021), Installation view at The Mattress Factory
Like Njie, Chambers aims to celebrate certain modes of life in their irreducible singularity. The title of the installation itself is a reference to the Black Community Survival Conference organized by the Black Panthers in the 1970’s (the footage from this conference is part of the installation). Chambers also, like Njie, celebrates the mundane-- in particular play and rest. Her installation involves embellished coffee and tea mugs, teddy bears and Minnie Mouses (with which Chambers also adorns Tubman’s portrait), and glittery stickers.  What is particularly interesting about Chambers’ work here is a strategic mobilization of kitsch. Clement Greenberg has famously argued that the difference between genuine works of art and kitsch is that while the former “imitates[…] the processes of art”,  the latter “imitates its effects.” Plenty of artists, from Jeff Koons to Odd Nerdrum, of course, have complicated this distinction, but what is peculiar to Chambers’ approach is that it convincingly considers a possibility of employing kitsch in a politically radical, emancipatory way.

Finally, Justin Emmanuel Dumas, in his exhibition “Good/Bones” (2021), invites us to problematize the idea of making home in a subtle, poetic manner, by bringing to our attention the aspects of materiality that usually recede from our awareness. Dumas discloses the tacit encounters between objects, encounters that are just as real, meaningful, diverse, and just as precarious, as ours. In talking about the world of material objects, he even employs an unabashedly anthropomorphic language. For example, in a video interview with the curators of the show, he claims that some of the found objects which he uses in this exhibition possess more “wisdom” than he does, simply by virtue of being older than him, and he also speaks of the surface of objects as bearing scars and as imbued with narratives. ​ 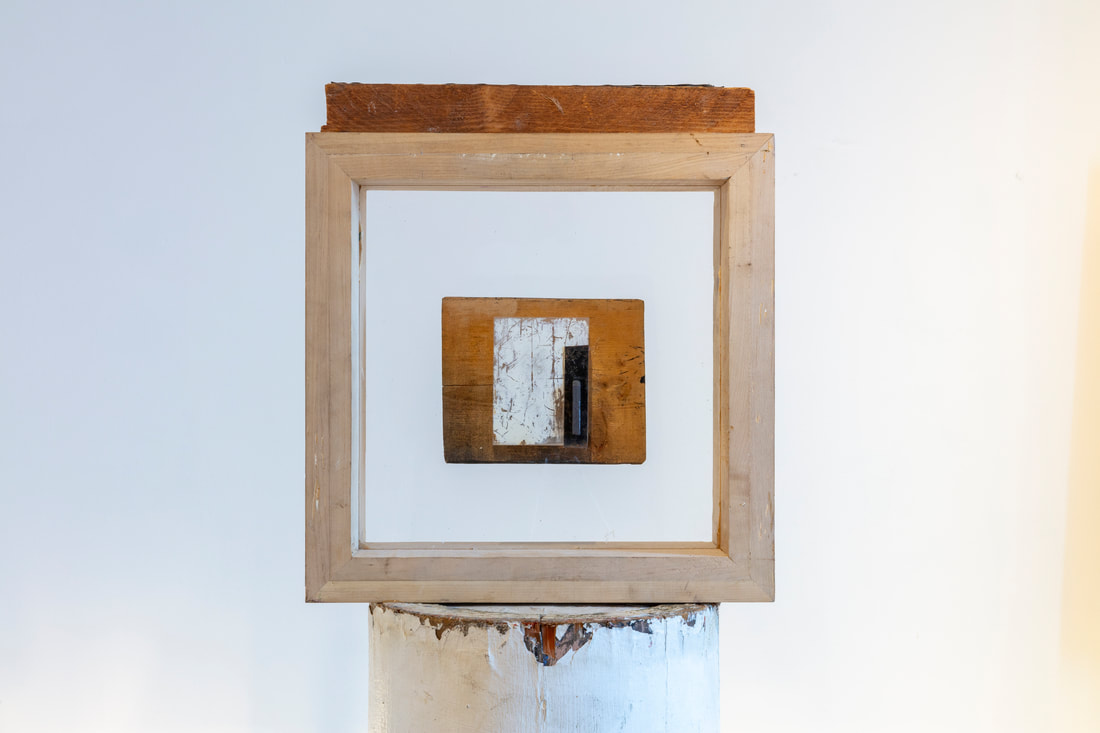 Justin Emmanuel Dumas, selection from “Good/Bones” (2021), on view at The Mattress Factory
Normally, when we think about the meaning of various objects, it is their use that constitutes their meaning for us. Cézanne once said that he wanted to paint a landscape in which the human was fully within yet at the same time truly absent. Dumas’ “painting shaped objects”, as he calls them, could be said to achieve something similar, even though the landscape which they invoke here is an urban, industrial, inorganic one. Objects such as shutters, a washboard, a wooden frame, are freed from their functions and allowed to participate in relations that are devoid of any pragmatic sense. For our part, we are invited to traverse their world just to realize that our relationship with it is inevitably that of trespass.

​making home here brings into tension (which, however, does not necessarily mean contradiction) the devaluation and effacement of life with the vivid cultivation of various forms of existence. Whether in their political or mundane expressions, these forms, we are reminded, are incapable of being fully erased. Not only that — making home here discloses forms of existence that are nonhuman and inanimate, yet which are just as worthy of creative cultivation.
Jurgis Viningas is currently pursuing a PhD in Philosophy at Duquesne University. His interests lie in the history of philosophy, political thought, and the intersections between metaphysics and aesthetics.
making home here is on view at The Mattress Factory through April 10, 2022.