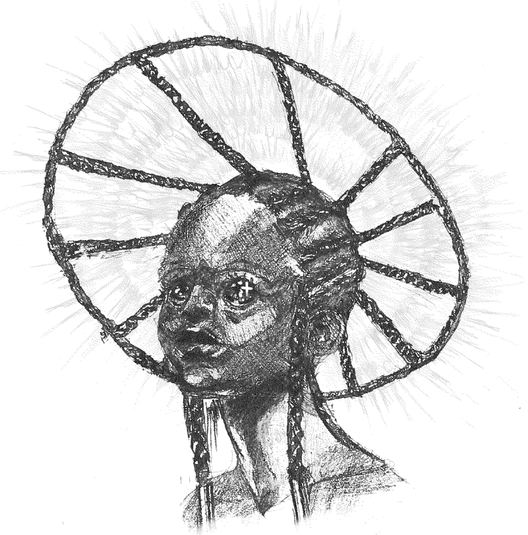 Cybernature and the Preservation of Space
​
by Shori Sims

11/12/2021
Edited by Harrison Kinnane Smith and Anna Mirzayan | Artwork by Shori Sims
​The views and opinions expressed in this article are solely those of the author. They do not reflect the opinions or views of Bunker Projects or its members.
For this addition to The Hand-Off series, Shori Sims shares a manifesto calling for Black cyber-feminism in the face of late-stage capitalism's disregard of nature. In the piece, Sims explores nature as a historical place of respite and communion for the oppressed, and positions cybernature as a the new frontier in anti-capitalist, communal freedom.
Struggle
Nature is a channel for the expression of energy, both social and spiritual: nature surrounds us, and since the beginning we have maintained a relationship of careful reverence. It connects all of us on a deep and spiritual level, like a medium for the mutual exchange of energy. Though nature is sometimes volatile, it was previously (at least, before the complicating factors of climate change) not entirely unpredictable. But now nature is under attack, and the people largely responsible for climate change — billionaires — are trying to escape the mess that they’ve made by venturing into Space. The so-called “billionaire Space-race” is an example of rugged individualism pushed to its most absurd possible extreme. The unhealthy self-imposed isolation of being alone in Space makes for an intensified dissolution of one’s humanity and inability to connect with the experiences of others. When suffered by billionaires who hold the lives of millions, perhaps billions at their whims, this isolation can have disastrous effects. This is where we must begin to embrace a new, man-made medium for spiritual interaction: the cyber universe. By engaging with the world through cybernature — virtual Spaces yet untouched by capitalism (1)  — we can harness the Internet as a medium to achieve spiritual relief from capitalistic systems. It is true that parts of the cyber universe are currently being used in the support of market systems, but the infinity of cybernature within this universe represents a never ending landscape to explore and harness for our spiritual ends. One way to rage against this problem of nature's destruction — besides fighting and organizing against it —  is to embrace spirituality through cybernature.
​Isolation and Alienation
As billionaires are becoming even more alienated from the planet, workers become further isolated from their positions, alienated to the furthest possible degree. Bosses have always been alienated from workers (2) though only now in the 21st century are they granted the ability to literally leave the planet Earth.
​
As we move to a more globalized society, the matter of the bourgeoisie vs. the proletarian class as Marx described is not so black and white as it was in previous years. Bourgeoisie means literally “middle class,” but the bourgeois of Marx’s time differs from our current one. Economic inequality has become starker and more pronounced: the wealth of America’s middle-class now pales in comparison to the richest of the rich. This disparity, however, appears insubstantial when juxtaposed with economic disparities between the modern bourgeois and the global working class. No longer can we draw a hard line between bosses and workers, as so many comforts formerly available to only the very wealthy are now shared by many. Some have access to cars, others are able to miss the occasional few days or even a week at work (if one has an appropriate excuse). The middle-class — though shrinking as it is — has become a familiarity of American life. At the same time, however, the amount of money bosses are able to amass in this late-capitalist milieu dwarfs that of any system previously undertaken on Earth. The gulf between the poor, middle class (well-off), and the extraordinarily wealthy is deepening all the time.

In one way or another, we are all at the mercy of our bosses; whether we work at a factory or engage with the products of that factory, we are adrift. We are all adrift in a sea of capitalist advertisement as we gaze at them on the latest iPhone, or on a billboard. Certainly, if nothing else, this is one commonality that we might agree upon. As a result, we feel powerless (though we never really are), and such feelings of powerlessness have drastic effects. This powerlessness results in consequences such as a propensity towards lashing out at their fellow person directly or indirectly (3) — it leads to a loss of empathy. In Marx’s understanding of “social reproduction,” connections between the production of goods and services and the production of life are inextricably linked. This means that capitalist reproduction reproduces the worker, creating the environment in which such a way of life can continue. Working long hours in, for example, a crowded warehouse or seated at a desk, the connection with nature is forcibly severed. These feelings may be intensified for BIPOC — the primary group for which I hope this manifesto is persuasive — who are faced with greater challenges to their very survival.

Faced with these obstacles to our sustained happiness, we must turn to what has sustained us in the past. One of these things is our collective and individual connections with and reverence for nature, both individually and as a collective, which also strengthens our connection with other people. But at this moment, even this small pleasure is at risk.
Cybernature
The presence of nature on this Earth is a beautiful and miraculous thing. The mere evolution of such infinitely complex lives — of plants, animals, and people — is beyond our comprehension. Nature is adaptable and, like the living organisms it houses, is constantly changing and evolving. Nature in its purest form is an expression of divine love. In the Anthropocene era, humans have managed to influence the evolution of a new form of nature: cybernature. Unlike Earthly forms of nature, cybernature is unhampered by time and Space. Carried on the waves of the cyber ocean, our dreams and memories, traumas and fears as well as triumphs find and influence those with whom we interact. I refrain from saying “those with whom we interact online,” because the Internet has become a thing that exists regardless of our acknowledgement of it. Like the ocean, we are endlessly tossed in the maelstrom of information. This is not necessarily a bad thing, only something that affects us as strongly as the tides.

In the Anthropocene, nature has gone from a thing that acts upon us to a thing that we too have the power to act upon — creating new forms of Space or a void that can be host to slews of possibilities. Space is part of nature, but it is the most pristine form of nature; Space is the Universe incarnate, vast and unknowable. Space is infinite. Space is the last truly spiritual place, totally unspoiled by this awful miracle that is man (who has defiled Earth and enslaved parts of cybernature). To defile Space — the mother of all Earthly creation — is truly the highest blasphemy.
Billionaires' Pollution of Space
Since going into Space, Jeff Bezos has had some very troubling ideas. “We need to take all [polluting] industries to Space,” he said in an interview with NBC news. “That’s going to take decades to achieve, but you have to start. And big things start with small steps.” This concept of Space — as planet Earth’s trash-can, "sacrifice-zone" as Bezos put it — is dangerous. It denies Space the status of nature, of something that we can’t afford to lose.

​Space is pure, free, unbridled possibility incarnate. While Earthly nature is a site for material communion, Space is a place for us to dream, a channel through which our spiritual energies might be carried. In modern times however, Black people are rarely extended the chance to experience Space’s wonders — to dream — instead we are forced to deal with the problems caused by racism that plague our community on Earth. Afro-futurist imaginings of Space have gotten us half of the way there — recognizing the massive potential of the stars and moving to harness the massive spiritual power held within — but to fully realize the goal, it must remain untouched. Now we are at the risk of never being able to experience such unspoiled beauty, with Jeff Bezos and others just like him wanting to throw garbage into the Space as a solution to global climate change, rather than eliminating the polluting industries to which he contributes. This solution is both morally and spiritually unacceptable.
Cybernature as a Medium for Connection
Sitting with my Black woman friends talking shit in the hot blue glow of laptop screens — two using our laptops and one sautéing garlic in a pan — we are at peace in the cyber universe,  occupying the pockets that have not yet been co-opted by capitalism. We were creating in our own small corners of the Internet, free from capitalist advertisement. Discussing and dissecting our traumas, we find ourselves using cybernature as we once used nature: to heal. Sitting there as my sister chopped tomatoes, I saw ourselves spiritually: carried by the cyber universe through the worlds of women who came long before us. Because cybernature is free from the constraint of time, we are able to connect with our shared destiny and commune with past ancestors all at once.
Embracing Spirituality
Our ancestors — the ancestors of BIPOC —  regularly communed with the spirit world through prayer and rituals. We have always been communing with spirits. In these earlier times, we often faced insurmountable struggles, all hope presumed to be lost at the hands of capitalists encroaching on our lands and our lives in the forms of pollution, unmitigated waste, land development and gentrification. We communed with spirits alone and in groups: often in prayer to beseech the mercy of the spirits at work. We swept our stoops and knew seeing a dead bird while pregnant foretold a death. In the case of African Americans, before we found ourselves kidnapped, we killed chickens, spit into our hands before shaking, and performed rituals for the safe delivery of babies. We still possess that power. Now, it is being channeled through the maze of the cyber universe — cybernature — in order to contact us. We can harness that same energy against our capitalist oppressors now by using the Internet as a spiritual, liminal Space between worlds. This is why contemporary Marxist analysis demands a Black cyber-feminist reading. Only in our rejection of white neo-facism can we become truly, spiritually free.
Footnotes
1. The engagement I propose can be understood as a form of embodied virtuality, a concept developed by N. Katherine Hayles that refutes the concept of the virtual world as an entirely disembodied experience. Rather, Hayles asserts that in the cyber universe, the line between mind and body is blurred.

Petrović, Gajo. “Marx’s Theory of Alienation.” Philosophy and Phenomenological Research 23, no. 3 (1963): 419–26. https://doi.org/10.2307/2105083.
Shori Sims is an interdisciplinary artist and writer born in 1999 in Baltimore, Maryland who now lives and works in Pittsburgh, PA.  She has exhibited work throughout Pittsburgh and the Midwest, as well as with Lubov Gallery in Brooklyn, New York, and internationally in both London, UK, and Toronto, Canada. Her articles and zines have been published in apmagazine, SPICY Zine, SKEW Magazine, and Yale’s Asterisk* Journal of Art and Art History.