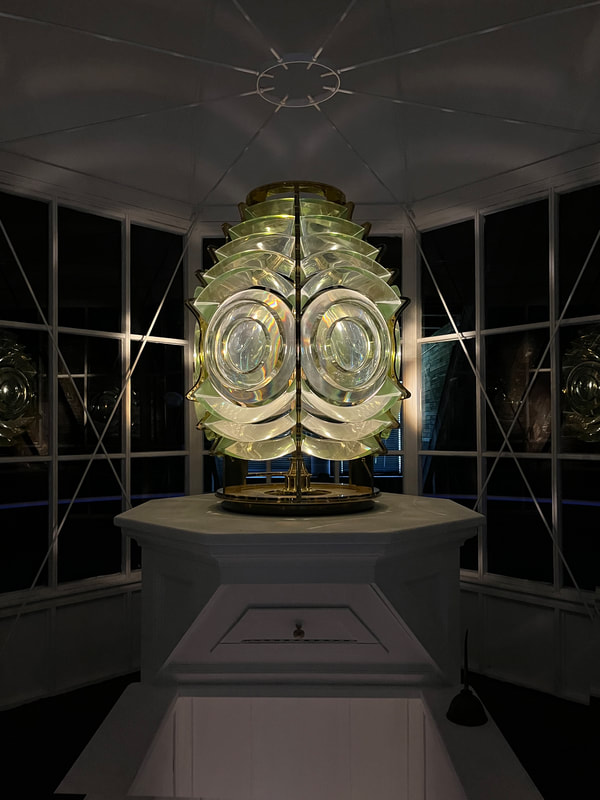 ​​The Distributive Property of the Unknown
​
Feature by Emma Riva

1/10/23
​The views and opinions expressed in this article are solely those of the author. They do not reflect the opinions or views of Bunker Projects or its members. All images courtesy of Evan Mirapaul at Troy Hill Art Houses.
The distributive property of variables states that x(y +z) = x(y) + x(z). In other words, you can separate out a whole into parts or parts into a whole—what’s inside the equation being multiplied has much more than it seems. Like all mathematical properties, it’s a tool for solving for an unknown, using the context around an unknown to try to piece together what the unknown is. If there ever were an artistic project that deals with the relationship between the indeterminate, context, and reconfiguration, it is the Troy Hill Art Houses. Behind the unassuming row houses of the high-elevation Pittsburgh neighborhood, founder Evan Mirapaul has created whole other worlds where context is never what it seems and the line between the known and the unknown becomes increasingly blurry.

​When I opened a closet in Thorsten Brinkmann’s La Hütte Royal (2022) at Troy Hill Art House, I didn’t expect  to come face-to-face with  high school algebra. Brinkmann adorned what were once inhabited living rooms, bedrooms, and bathrooms with found objects, including vinyl records, toy racing cars, action figures, salon chairs, swimming pool ladders, and behind one closet door in the opening hallway, a display of frayed spiral notebook paper with problems demonstrating the distributive property scrawled on them. I had come to Troy Hill primarily to speak with Lenka Clayton and Phillip Andrew Lewis about Darkhouse Lighthouse, the most recent of the installations, but when I toured the other two spaces and found myself looking at complex mathematics for the first time since senior year, it gave me a new perspective on what Mirapaul and his collaborators had put together. 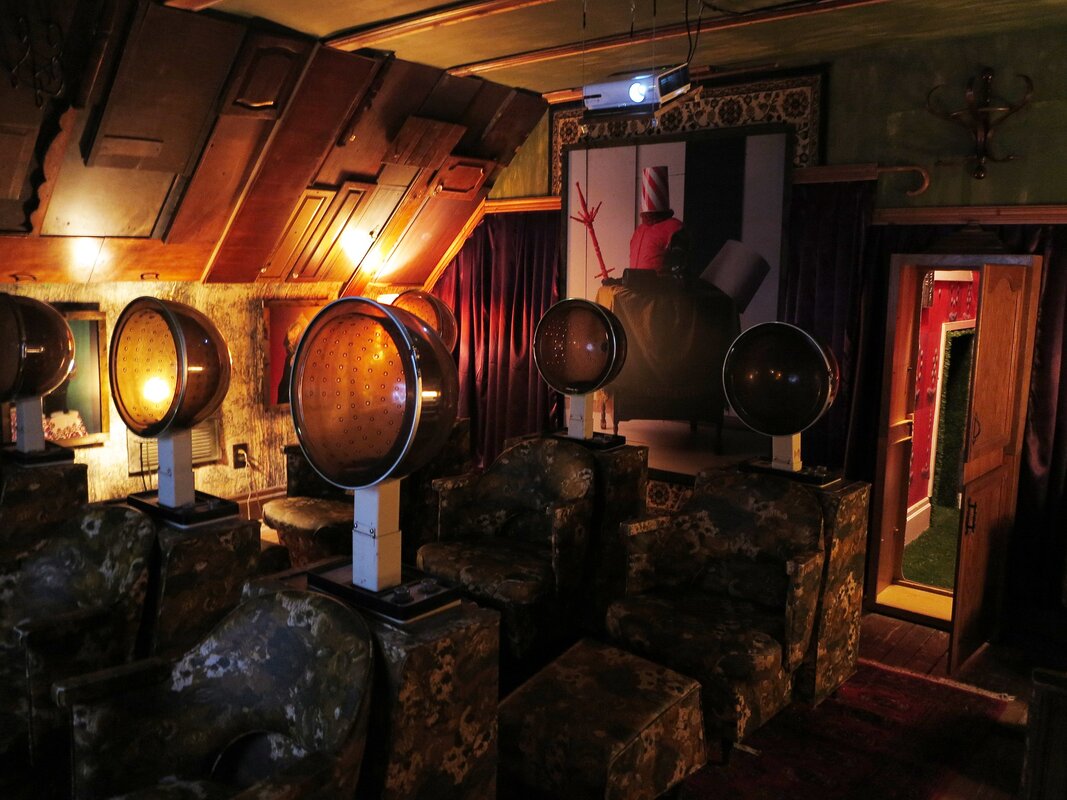 Thorsten Brinkmann, La Hütte Royal (2022), installation view at Troy Hill Art Houses.
The most striking example of this concept of the distributive property within Darkhouse Lighthouse manifests at the top of the lighthouse structure, where Clayton and Lewis place four windows,  each corresponding to different times of days and climates. One window is windy, another foggy, another day, another night. Breezy plus foggy plus day plus night inside the brackets of the lighthouse structure inside the further bracket of a burned-out row house equals a mesmerizing black hole of an installation experience. Clayton and Lewis’s lighthouse replaced the burnt core of 1913 Tours Street after a fire decimated the building. The bathroom and kitchen might be in the same place within the building, but artistic changes to the original interior remain a mystery. When I asked whether a coat of pink and green paint was an artistic liberty or a replica of the original interior, Mirapaul noted that the interesting part was that I had to ask at all.

“We wanted an architectural structure that’s highly visible to become invisible,” Clayton said of the design process, which took several years and involved permits from the city of Pittsburgh and a construction team. “This isn’t a place that has lighthouses, since it’s not near the ocean--We’re 382 miles from the ocean here, but six million years ago, this was underwater, and six million years from now, it might be underwater again,” she explained. Clayton came to Pittsburgh from Cornwall, England, a seaside community where lighthouses still dot the coastline.However,the anachronistic, mythic status of  lighthouses inspired Clayton and Lewis. The lighthouse being unmoored from the coastline further added their interest in creating a space that spoke to deeper, speculative, geologic notions of time than our own minutes and hours. As we ascended the lighthouse into what would have been the lighthouse keeper’s bedroom, Mirapaul flicked the calendar on the table to October 21. Even within the time capsule, time passes. The lighthouse keeper’s chamber is fully functional, with a stove, coffeemaker, countless books on seafaring, and a type of curved bed that Lewis explained is called a “banana bed.” Lighthouse keepers adapted to sleeping curved on their side in them, and Clayton and Lewis’s banana bed is fitted with a duvet made of flags from shipwrecks. Darkhouse Lighthouse is full of small surprises like that, each object with some story or factoid behind it---Troy Hill Art Houses’ distributive property of viewing experience in action. 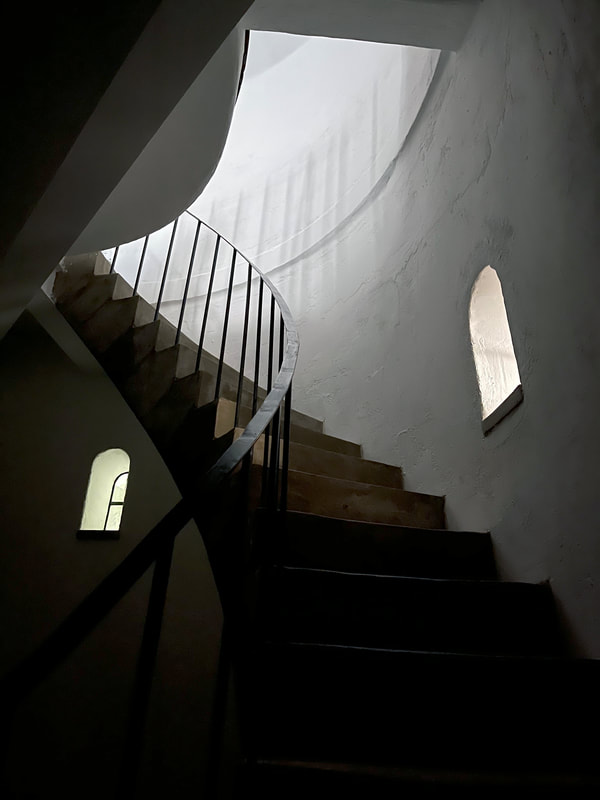 Phillip Andrew Lewis and Lenka Clayton, Darkhouse Lighthouse (2022), installation view at Troy Hill Art Houses.​
The very top of the lighthouse is home to a working lens made of 56 pieces of acrylic glass and constructed by the last lighthouse lens manufacturer in the United States, Macbeth-Evans. The manufacturer now works at Disney World, adding another wrinkle to the discussion of what makes a space “real” or “fake.” Installations within domestic spaces are often considered to be “fake” houses, because arrangement of objects within them exist only to be viewed; but who’s to say that we don’t all do that within our own homes? Disney World creates a whole landscape which, if repurposed as a work of contemporary art, would probably have a lofty statement about kitsch, memory, and nostalgia attached to it. The lens atop Darkhouse Lighthouse rotates and glimmers, bringing to mind what it’s like to meditate in front of a flickering candle to stimulate DMT (yes, like the psychedelic) and melatonin production in your brain.

Lewis described Darkhouse Lighthouse as a “single forward moving navigation,” since from the time you enter through a darkened hallway to making a looping exit through an outdoor garden space, there’s never a need to repeat steps. Once you leave the confines of the building, the artwork continues into a garden full of undulating Little bluestem plants and a rust-colored conical shape known as a daymarker. “With a daymarker, if you’re at sea and you see it lined up with the lighthouse, it means you’re about to strike rocks,” Lewis said. Using the little bluestems and the daymarker, which is modeled in both material and shape after a real daymarker in Clayton’s native Cornwall, Clayton and Lewis simulate an ocean in a landscape without one. Additionally, beneath the little bluestems, the soil is made up of burnt remnants from 1319 Tours in its original form. Yet another duality here is fire and water, two opposing elements that cause equal amounts of destruction. 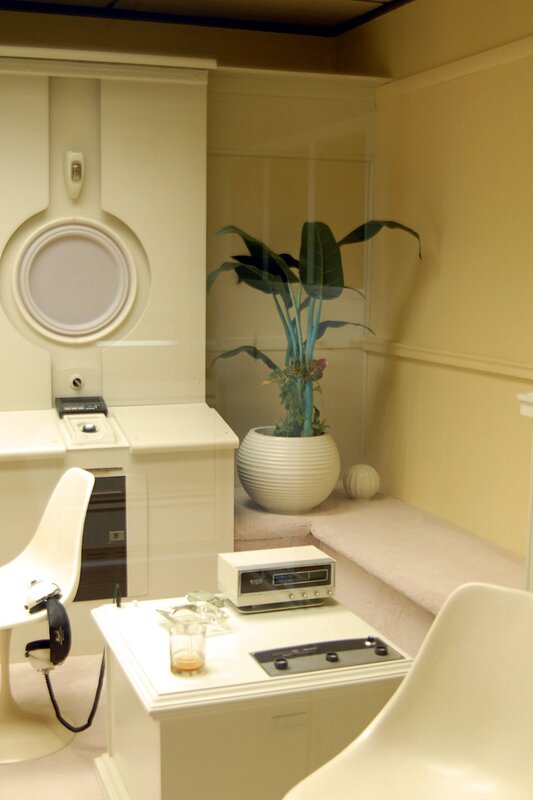 Phillip Andrew Lewis and Lenka Clayton, Darkhouse Lighthouse (2022), installation view at Troy Hill Art Houses.​
Though I didn’t have the opportunity to speak to Thorsten Brinkmann or Robert Kuśmirowski, Brinkmann’s La Hütte Royal and Kuśmirowski’s Kunzhaus were equally thought-provoking and mind-bending. Brinkmann’s found object space at 1812 Rialto Street creates an Alice in Wonderland funhouse of found materials, including a tunnel crawl space leading into a macabre theater, where each chair is a vintage hair salon chair, all within the confines of a formerly dilapidated building that has a “Pittsburgh toilet” in its basement as a reminder of an industrial past. (Mirapaul noted “No matter how much you like Thorsten’s art, I tell people that my greatest accomplishment is that this house doesn’t smell like a toilet.”). Kuśmirowski’s Kunzhaus draws inspiration from both St. Anthony’s Reliquary and The Center for Postnatural History and uses the inhabitants of 1718 Rialto Street to create an unsettling past-future dialogue. Kunzhaus is probably the only space where you’ll find a Catholic relic and a nuclear laboratory behind the same set of walls. “What unites all of them is the concept of domestic space,” Mirapaul said. “We want people to look at the front of other houses and think that something like this could be behind any of them.” In a world full of literal and metaphorical walls between individuals, communities, and ideas, Troy Hill Art Houses invites us to see those walls not as dividers but as possibilities.
Troy Hill Art Houses is open to the public for free by appointment. Philip Andrew Lewis and Lenka Clayton will be part of an installation at the Mattress Factory’s 1414 Monterey St annex in early March 2023.
Emma Riva is the managing editor of UP, an international online and print magazine that covers the intersections of graffiti, street art and fine arts. She is also the author of Night Shift in Tamaqua, an illustrated novel set in the Lehigh Valley, and a contributor to Belt and Widewalls. More about her work can be found on her website and Instagram.