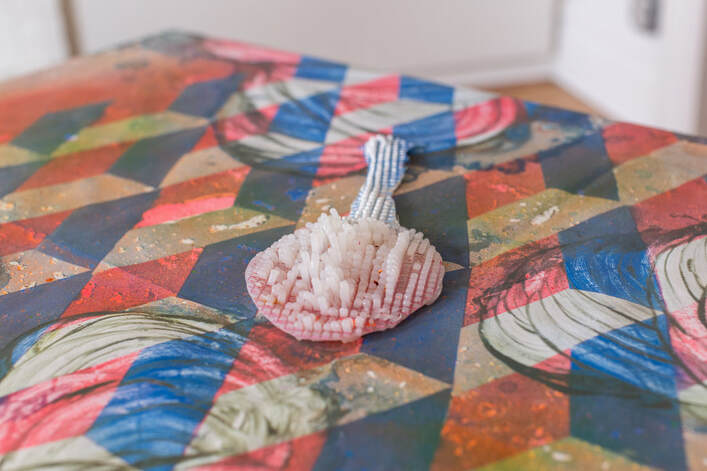 "Parataxis and the Brush"
​In the galleries of the refurbished residential apartment, buffeted by raw brick walls and exposed wood, art works by Eleanor Aldrich and Barbara Weissberger lounge, casually strewn about on a table or couch, waiting. It is a far cry from the sanitized, hyper-orderly white cube of the museum, where works often seem captive, specimens arranged in their designated areas— tangible, interesting, but hardly alive.

Though seemingly sparse, the land of CUSTODIA— aptly displayed in a ‘living’ room, teems with life: large photos of spray bottles of cleaner printed on fabric; a sculpture of the GAIN logo lying flat, nestled in the den-like fireplace; a 3D milk crate rendered like string on the floor in front of a semi-covered mirror; the soft recreation of a hairbrush in fabric. Threads hang loosely along the sides of sewn textile collages, threatening to unravel. A portion of the imagery throughout is concealed in the folds.  The only way to know would be to touch the objects— that kind of familiarity is not traditionally allowed in a ‘museum’ space— it is taboo. Yet the works tempt you to do just that.

Absolved of their hard edges, usually-rigid objects are turned into tangled, drooping sculptures or 2D photos, projecting flatness where there was depth. Turning these objects into printed images renders the tangible abstract, bringing into sharp relief the purpose of these objects.  The sponges are not sponges— they are constructs made in the faint image of cleaning supplies. As the image of an object stands in for the real object, it disrupts the chain of signification and the primacy of the signified over the signifier. These larger than life sculptures and printed pictures seem to over-signify their purpose, rendering the objects almost comical. ​ 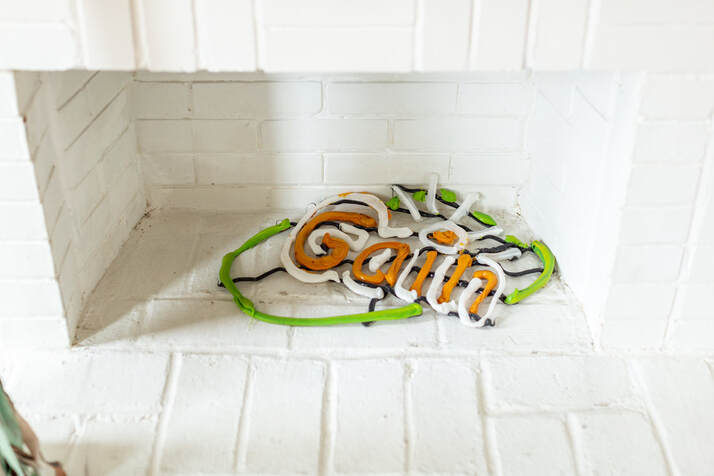 "Flop, Fear and Fate"
​One of the most striking pieces is a sculpture of the GAIN logo, made of what appears to be soft plastic, lovingly placed at a jaunty angle in the gallery’s white fireplace. Tucked in, inside the fireplace it seems disembodied, which is strange given that GAIN is not a body but the brand name of a product. The work plays with the way the name itself conjures the object, denying the presence of the object itself in favor of recognition of the name. Standing solitary, GAIN seems almost lonely. By transforming the logo into a work of art, the artists disarticulate it from its merely commercial meaning, however, they are also careful to remind the viewer that it is impossible to separate the brand completely from its commercial origins. 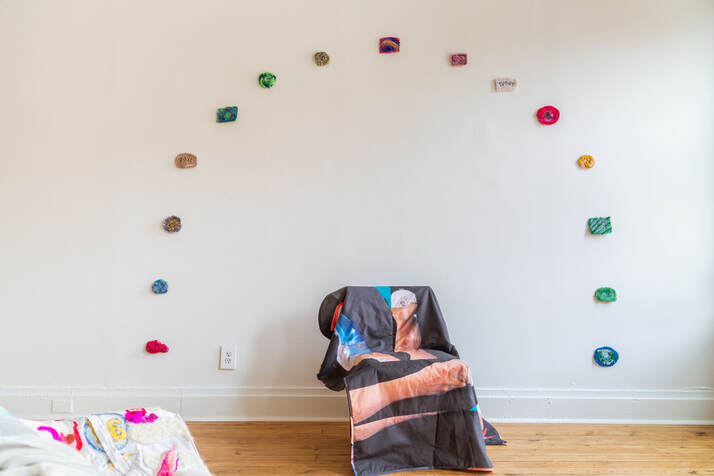 "Meek Arcana"
​Perhaps the most otherworldly work is Meek Arcana (2020),  a sculpture that consists of multi-colored sponges covered in glitter or colorful salts, arranged in a tall arch like a shrine devoted to nothing. The radiating formation, like the halo around paintings of Our Lady of Guadalupe that indicates her holiness. Meek Arcana entices the viewer into a pilgrimage away from the paternalistic church to a pagan altar that pays homage to its feminine heritage with sponges that shimmer from afar like precious stones. When used for divination or self-reflection in tarot, the Major and Minor arcana work in tandem to highlight different aspects. The Major usually symbolizes important events, while the Minor reflects the everyday. By effectively dressing up sponges to appear precious from afar, the ‘Meek’ Arcana plays with the expectations of sacred spaces by revealing them to be infused with the mundane. In this system, it is the sacred and the ordinary which work in tandem. Unlike the Virgin of Guadalupe, there is no person under this arch. The piece uses both the arch form, which exploits expectations of human presence, and the ordinary matter of sponges (what’s meeker than a sponge?), to expose the sacredness of objects themselves. The elevation of sponges in particular also underscores the way that cleaning, as a form of care, can be seen as a devotional practice. Aldrich and Weissberger work with ordinary objects typically related to the routine cleaning and maintaining of the household. Yet in the show, nothing is new or store-bought. They have either already been used (as in sponges printed with ink or covered in other substances) or mere images of the subject matter: Things that normally make a room cleaner and tidier do the opposite, appearing haphazard, already used, or useless as intangible images. If they are not cleaning, what kind of work, if any, are these objects doing? 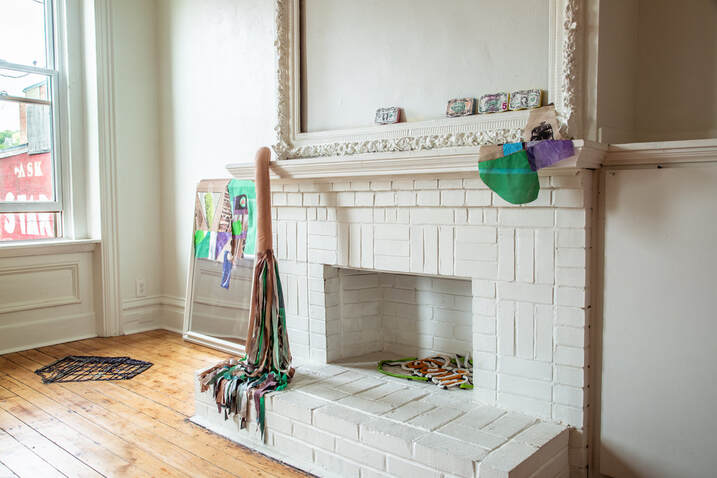 "Flop, Fear and Fate"
​The objects in the galleries at Bunker have their own habitat, a unique world of scraps that challenges traditional ideas of the world and who or what inhabits it. Here it is the objects that have privilege, challenging the viewer to ask whether we can extend care to them. Custodia, of course, comes from the word ‘custody,’ which means both belonging and care. By removing these objects from their usual environments and creating them anew, the artists reveal the often invisible labor of caring and reproduction and challenge traditional notions of the home. Custody is stewardship, communal by nature, which this cooperative exhibition— created by two women working in tandem, literally doing ‘women’s work’— highlights beautifully. By taking mops, sponges, cleansers etc. out of their typical environment and recasting them in new material that explicitly hinders their ability to be used for cleaning, Aldrich and Weissberger cast the domestic space,— and by extension the women who typically perform domestic tasks— in a new light, outside of the capitalist focus on utility and productivity. Against all odds, the home created by the exhibition is comforting—not because it is tidy and managed, nor because it is useful, but because it has been embedded with meaning through a particular kind of cooperation that can be felt. Custodia bristles against the notion that what is not useful is obsolete, and challenges the idea that things or people have a contained and limited set of potentialities.The artists do not invent or impart new possibilities into objects so much as they foreground the materiality that was always there, obscured.

“The Soft State of Custodia” is a collaborative show that bypasses language, with its hegemonic version of meaning, in favor of the realm of the imaginary. Deploying the word ‘state’ in the show’s title ensures that the viewer doesn’t forget that caring is political. Wiessberger, a notorious fan of wordplay, also takes advantage of another meaning of state, as condition or situation. A political ‘state’ is only possible precisely because ‘state’-as-situation gestures at the web of caring relationships upon which politics is based. Wrenched from their regular contexts, these lowly objects enter into their own set of relations. They persist without us, long after observers are gone from the gallery. And though they are no longer useful (or they never have been), they endure.