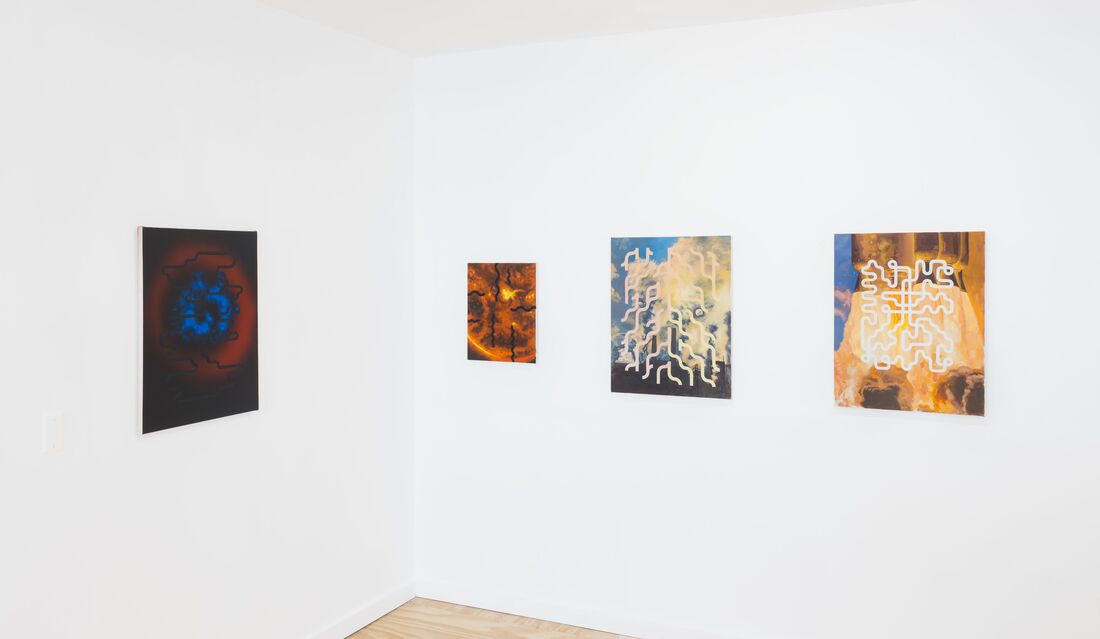 07/21/2022
Edited by Anna Mirzayan | Photos courtesy of the John Burt Sanders and here gallery
​
​The views and opinions expressed in this article are solely those of the author. They do not reflect the opinions or views of Bunker Projects or its members.
In a time when new images of distant galaxy clusters are made by hyper-advanced infrared telescopes and roughly one billion users post videos and images multiple times a day to social media, critics and artists alike have found themselves asking: is painting dead? To skeptics, paintings are at best anthropologically-charged relics from a time long past, and at worst, paintings are the objects of desire, traded on a global market of untraceable aggregated wealth.  John Burt Sanders' current exhibition of oil paintings, Spontaneous Horizon (2022) at here gallery, curated by owner/curator Lexi Bishop, takes this convoluted landscape into account while unapologetically stepping into a new chapter of artistic practice.

Artist John Burt Sanders (JBS) has called Pittsburgh home for more than 10 years. He relocated here after grad school looking for a city that would, most importantly, be affordable. Pittsburgh was the city where he could realistically support himself and devote considerable time to making paintings. JBS has most recently presented solo exhibitions at UnSmoked Systems in Braddock as well as Bar Marco. He has become known for his signature interlacing forms and his unique approach to contemporary abstract painting.

The other key voice in this exhibition is the owner/director of here gallery, Lexi Bishop. With a specialty in Contemporary and Post-War art from Christie's Auction House she brings nearly a decade of art world experience to the table (her action-oriented approach and sharp humor also plays an important role in her business). Lexi moved to Pittsburgh from LA right before the pandemic to join her artist partner, Wade Kramm who had recently returned from NYC to his hometown of Oakmont (20 min North of Pittsburgh). From there Lexi set out on a journey to launch her own gallery in the city she now called home. She has been producing exhibitions in Pittsburgh for the last year and a half, some of which were presented at roaming locations, like The Boys Club and Arsenal Motors in Lawrenceville. After a winding search for the perfect gallery space, Bishop landed in the Mexican War streets on the Northside, just a short walk from the Mattress Factory Museum. Bishop is one of a small number of young gallerists in Pittsburgh who run commercial galleries and is fully invested in Pittsburgh as an up-and coming contemporary art city.

On June 30th, 2022, JBS and Lexi Bishop joined Bunker Projects' Creative Director Jessie Rommelt for a conversation on Instagram Live. The trio discussed how Bishop and Sanders met and conceived of Spontaneous Horizon, as well as the collaborative relationship between artist and curator/gallery owner. JBS talked about the many influences of classical painting on his works, and Bishop teased out the show's concerns with environmental degradation, urban decay and climate catastrophe. This feature is an outgrowth of this conversation, as well as a mediation on the exhibition as a whole. 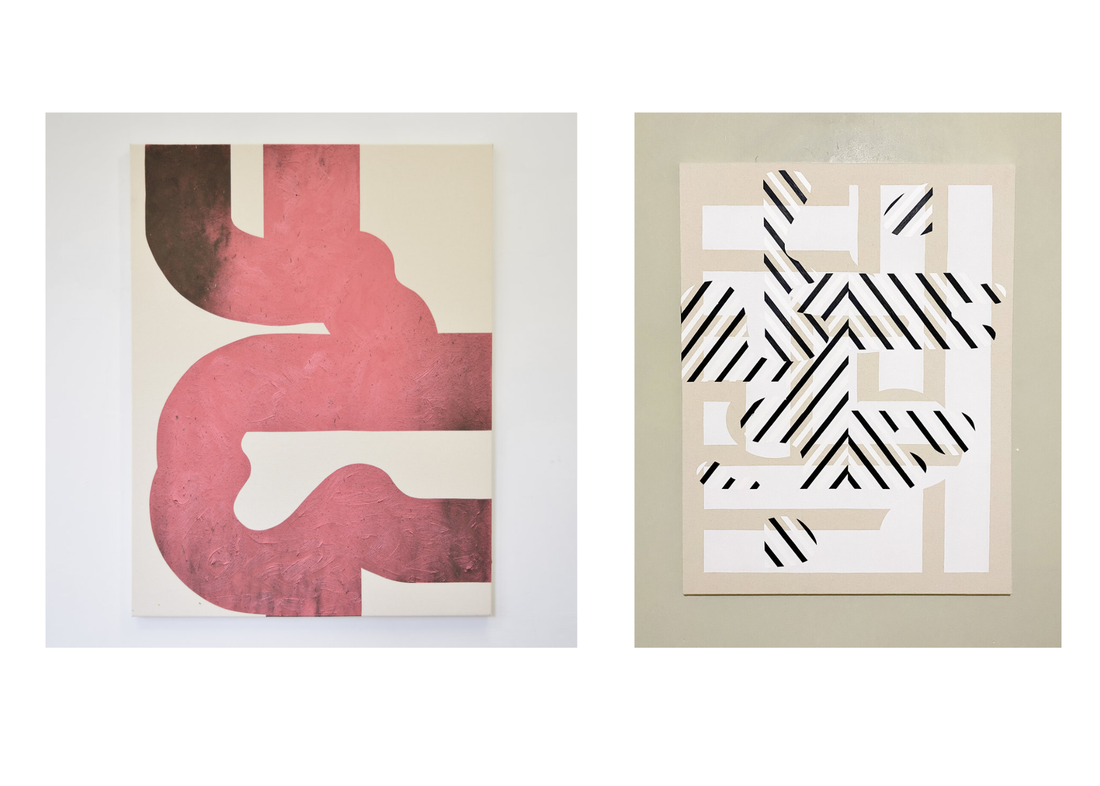 John Burt Sanders, Round Side Sharp Side (2019) and Everything tends toward perfection (2020), images courtesy of artist
The stories of these two individuals collide somewhere early in 2021 when John Burt Sanders visited Bishop's first Pittsburgh-based exhibition, Deep Blue by Molly Greene. John was just there to enjoy the show but then the two got to talking. A studio visit led to an ongoing dialogue and Bishop brought a selection of Sanders' work into an online sales catalog. This type of organic partnership between artist and gallerist is an important litmus test for any future partnership, as it shows whether gallerist and artist work can collaborate in a way that grows each of their respective practices. Thanks to their collaboration, JBS brings new techniques and attitudes to this show.

​Spontaneous Horizon marks an epoch in Sanders' work where iconic images and historical paintings (likely obscure to most non-art-history buffs) are used as layered visual material. By intentionally remastering archival paintings and photographs that span the 18th, 19th, 20th and 21st centuries, he builds various augmented realities on the surface of each painting that are married with his signature interlacing forms and brushwork. “It's always a nice surprise to be able to combine imagery and see it result in something that feels new or fresh, or a combination that feels powerful in some way. I didn't know if it was going to work until the last minute when I removed the masking and saw the combination of the line work over the image. So in that way, they feel risky to spend a lot of time on something that may not actually work,”  Sanders remarks. 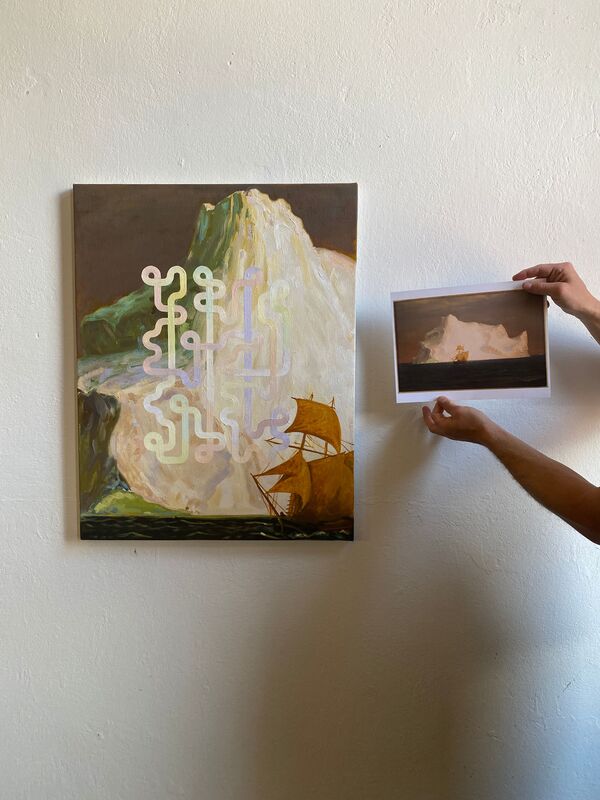 Artist holding image of Frederic Edwin Church's The Icebergs (1861) alongside his work Iceberg (2022) at here gallery, image courtesy of here gallery
In his previous decade of work  JBS explored a wide range of expressionist surfaces and tonal effects. An architectural approach to color is interrupted with glitches and line-breaks bringing in a sense of effortless spontaneity. The majority of his past work is void of pictorial tradition. In contrast, while the interlacing forms in Spontaneous Horizon are some of the most enduring languages in his work, they are being orchestrated very differently as they interact with the underlaid imagery and tight cropping, gesturing to the spirit of power-play and compromise. In this new series, JBS deliberately brings in moments and icons from the past and present — the atomic bomb, the iceberg, the galaxy, the forest. As Bishop puts it, “It feels like in this body of work, it's about human excesses, but especially in relation to nature and its effects on the natural world.” 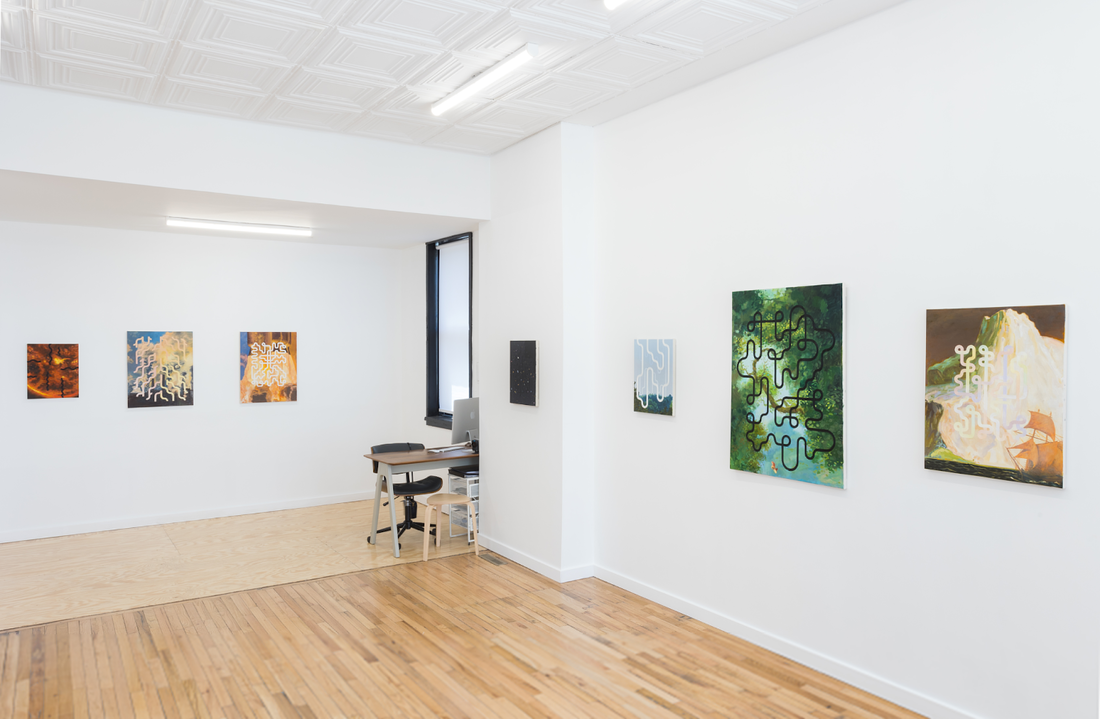 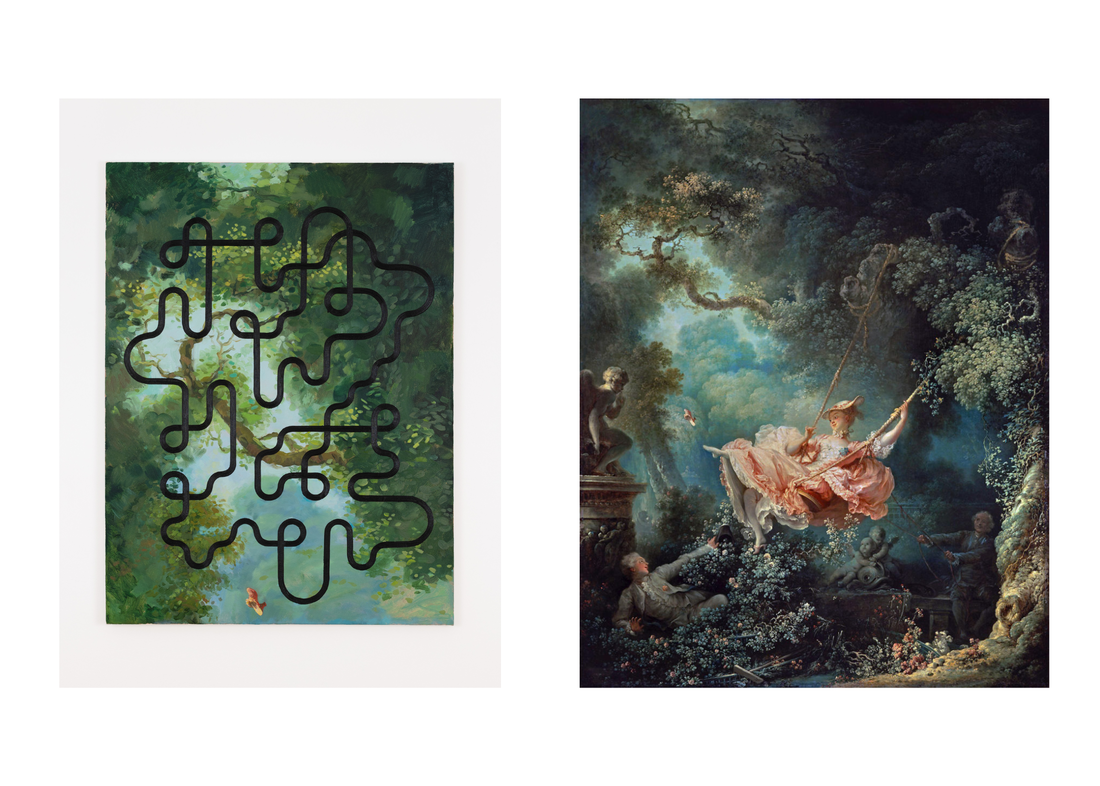 John Burt Sanders' Swing (2022) alongside Jean-Honore Fragonard's The Swing (ca. 1767)
In this show, the interlacing forms take on a new agency that allows them to brand, pierce, dissolve, veil and restrain the imagery underneath. The loyalty JBS has to his interlacing forms is impressive especially because they are such a source of unease for the viewer; they keep the viewer away from settling into any comfortable conclusion. This phenomenon of feeling a strange, almost ticklish distance from being able to know something (anything) is what JBS does so well. He is interested in playing with our discomfort of the unknown and perhaps even the paralysis of feeling like there is no answer, no action.

One could reasonably argue that this exhibition deals with our ongoing moment of environmental reckoning; there are many expressions of the degradation of the natural world present in this series of paintings. Each painting takes us to a different location, some that feel very earthly, others cosmic or even theoretical.  Perhaps the one closest to home is in Confluence (2022), where JBS renders his take on Darrell Sapp’s photograph for Pittsburgh Post Gazette of the 2018 Clairton Coke Plant fire. The piece is not only affective for natives of the Pittsburgh region but humankind in general, as we experience daily life subject to on-going air and water pollution whose ramifications are species-deep. 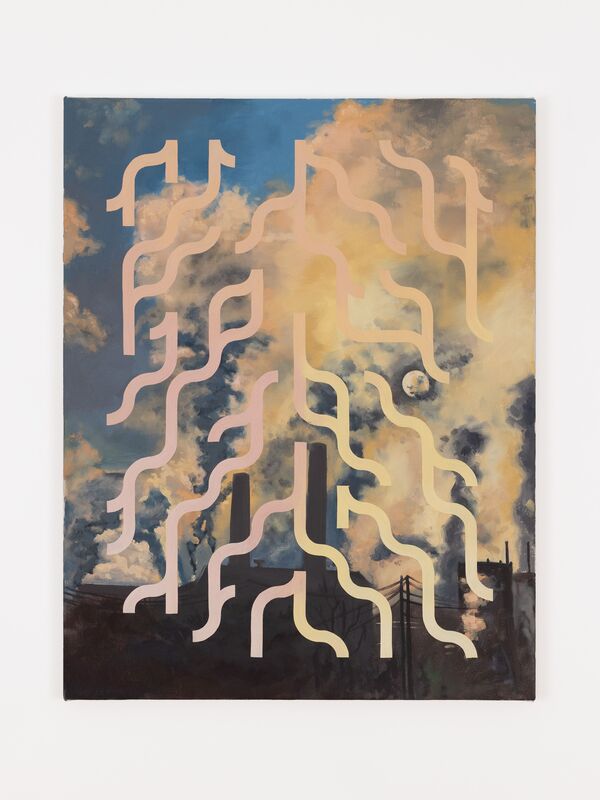 John Burt Sanders, Confluence (2022)
Perhaps one of the hardest things we can do is sit with the discomfort of not knowing how to contribute to change– the impotent feeling that that no matter what we do we are just a speck of dust in deep space. All of these affects are present in Spontaneous Horizon,  but the show also presents a playful figment of hope. Each painting is ready and willing to be an ever changing game board for your state of mind, when you’re enjoying it or when you’re perplexed, pessimistic or tired. They are ready to unfold with you and be a container for your mental map, your tongue-tied conversation or imploding lucid dream.
Jessie Rommelt is the Creative Director and Co-Founder of Bunker Projects. She received her BFA in Sculpture from Penn State University in 2011. Jessie identifies her work as an artist, curator, and organizer. For the last ten years, her creative practice has evolved alongside Bunker, growing different skills such as grant writing, community-building, gardening, and interior restoration.  Recently, she is passionate about peer-to-peer, artist-centered programming, and mobilizing artists' skills in the wider local community. In January 2022 she was hired as the full-time Creative Director and looks forward to continuing to grow the impact of Bunker into the next decade. Jessie is also one of the founding coalition members of VACE (Visual Arts Coalition for Equity).

Spontaneous Horizon is on view at here gallery through July 23rd.

The original conversation between Sanders, Bishop and Rommelt is available to watch here.