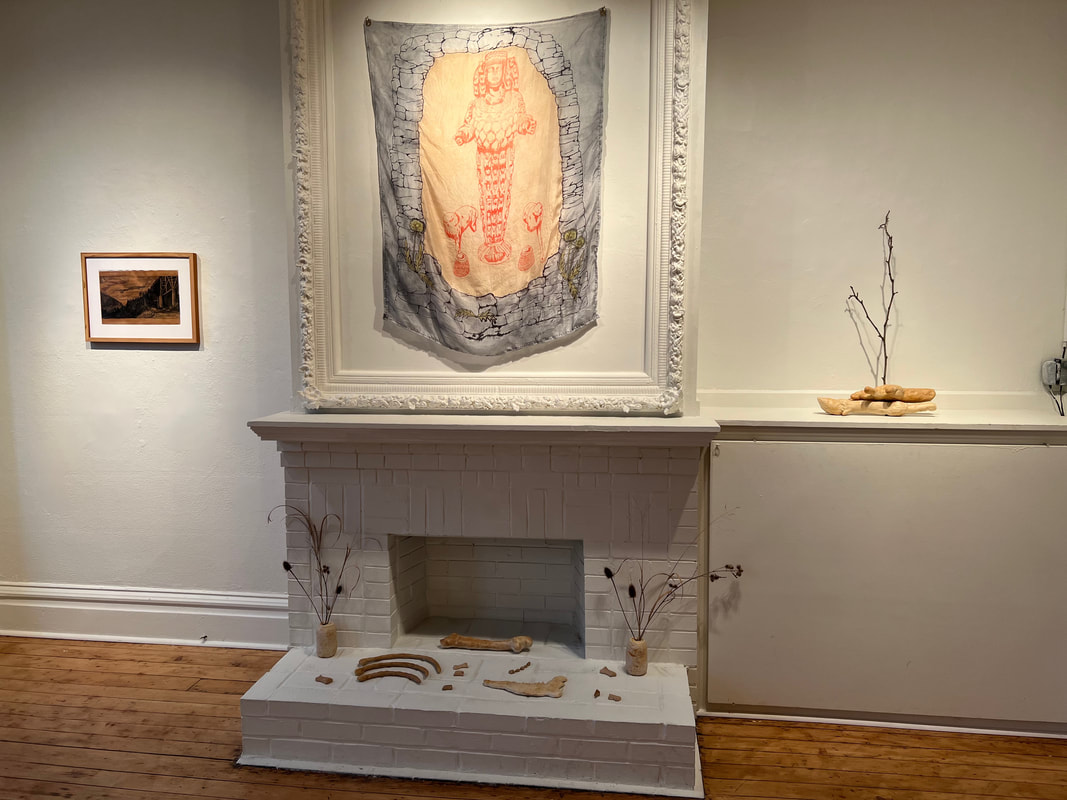 You were born good at make die (2022), installation view at Bunker Projects

04/30/2022
Edited by Anna Mirzayan | Photos by Sean Stewart
​
​The views and opinions expressed in this article are solely those of the author. They do not reflect the opinions or views of Bunker Projects or its members.
On view at Bunker Projects, You were born good at make die (2022) is a solo exhibition of fabric wall hangings, silk paintings, charcoal drawings, and dead dough sculptures by Craft Resident Krystal Difronzo. Growing up in the Chicago suburbs, the roots of the exhibition are autobiographical for the artist. To help understand their paternal intergenerational trauma, each artwork grapples with how intimacy, care, and nourishment can occur directly alongside violence.
​
The exhibition, despite stretching across two white rooms, feels like it’s outdoors; fabric artworks in shades of muddy brown, earthy green, bone yellow, charcoal black, and cold-night blue cover the walls and front-room windows. However, it is the handmade antlers, bones, and beer cans that tell me I am in a specific backwood: a hunting ground.

​“Dead Deer & Other Animals” by the band Thanksgiving is a song from Difronzo’s teenage years that they often played while driving solo on rural, Midwestern roads. The song perfectly soundtracks the exhibition as each line steers me toward dead does, circling vultures, and ruling men. Aptly, Difronzo plucked lyrics from the indie-grunge song to name the exhibition and a majority of the artworks. 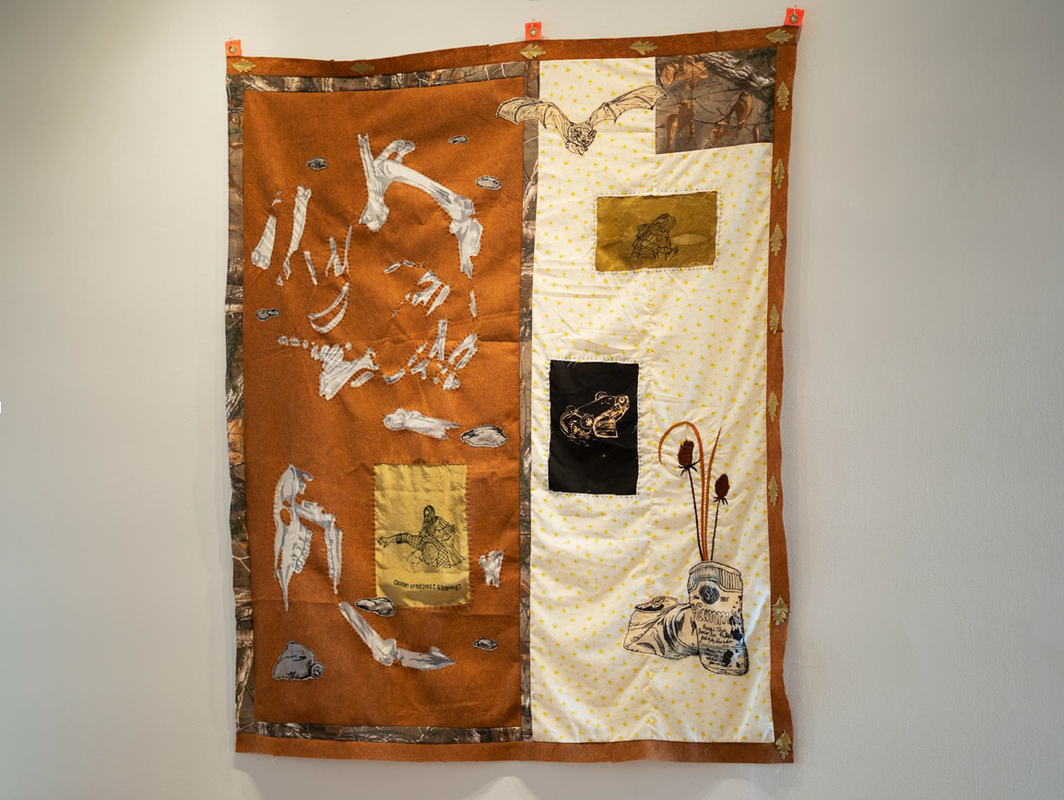 "No one could pull her off the road" (2022), natural dyes (osage orange, pomegranate and iron) and resist on silk, felt, found fabric, bleach, embroidery floss, ribbon
Fabric wall hangings dangle from hunter orange loops and are sewn together using a variety of secondhand fabrics, RealTree camouflage, and naturally dyed silk. As physical objects, they look as if they could provide the familiar comfort of a blanket, but their imagery depicts death and violence. Animal skulls, dead deer, pecking vultures, flesh-eating coyotes, car crashes, and an altercation between a fictional father and daughter are hand-painted beautifully on soft pieces of silk. This duality of using soft silk to carry imagery of violence and death can be seen repeatedly throughout the exhibition. 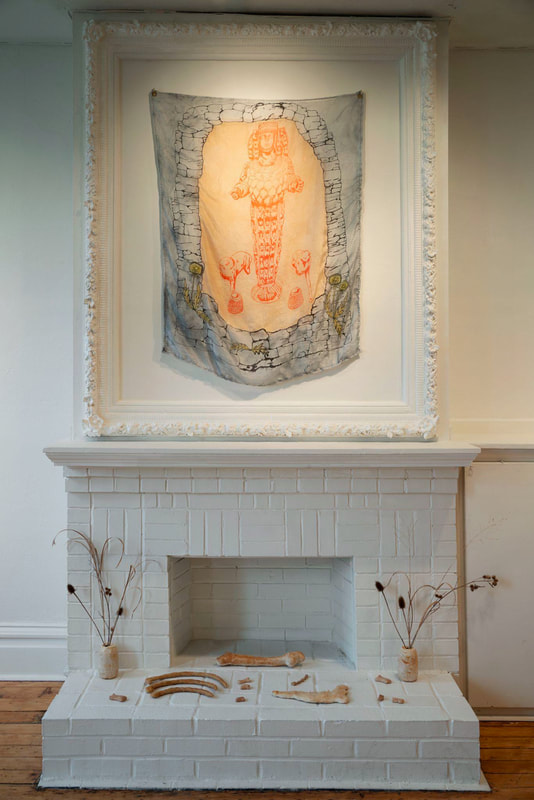 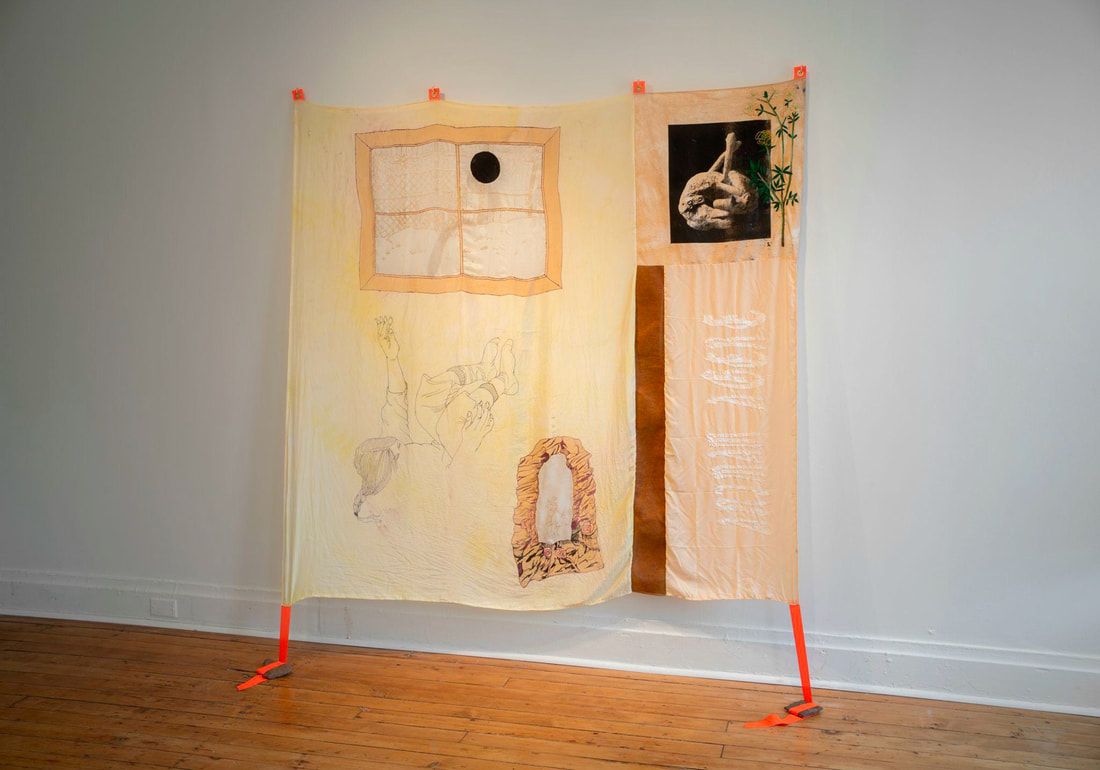 Last Gasp (Grotto for Diana) (2022), natural dyes (tea, madder root, pomegranate) and resist on silk, screenprint on bloodroot dyed cotton, embroidery floss, ribbon, felt, slate
Softness carrying the hard, however, is not the only way these two exist in the exhibition. In the front room on opposing walls are a grotto for Artemis and a grotto for Diana — a single deity shown in her Greek and Roman forms. Painted on silk using natural dyes, this deity not only protects wildlife, she kills it. As goddess of the hunt, she is often depicted with a bow flanked by gnashing hounds. Surprisingly, she was even called upon by women to aid in conception and delivery. For Diana/Artemis, the nurturing of wildlife and its termination come from the same hand. Those soft and hard, violent acts now coexist within the same entity. A revered deity. Through the making of these artworks, Difronzo processes how protection, in the form of hanging blankets, is stitched together from pain and how the helpful hand, in the form of a beloved goddess, also slaps. 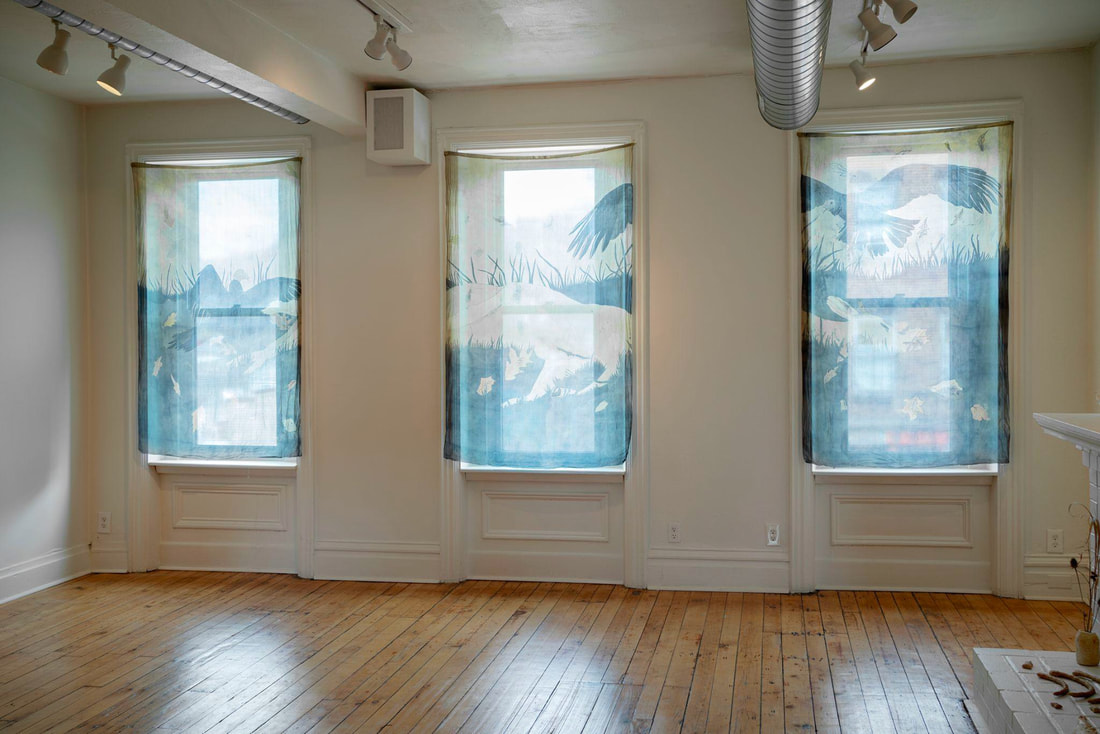 "So come and join the feast" (2022),  natural dyes (tea, madder root, turmeric, osage orange pomegranate, and iron) and resist on three silk gauze panels
Difronzo, though, does not let violence and death mark the end of the exhibition. They dig forward to see how the aftermath of a violent act, mournful decay, or death can yield nourishment, growth, and regeneration. So come and join the feast (2022) is a silk painting of a dead deer that becomes food for scavenging vultures. The painting, cut into three panels to cover the front-room windows, casts an end-of-winter blue over the gallery. The dead deer laying limp in overgrown grass looks as if it was beginning to be gutted by its hunter, or goddess, but was stranded. Two vultures attend to its decaying body, its flesh a perfect meal.

​Difronzo adores vultures, appreciating them as natural custodians and caregivers. As scavengers, they remove carrion from the cold ground and consume it as nourishment for themselves and for their babies. They use regurgitation to provide food for their young, making every solo meal a family treat. This selfless act of storing food inside one’s self, not to eat, but to deliver can be seen across from the windows in the fabric wall hanging “The vultures always want to eat” (2022). In the center of the patchwork composition is a hand-painted vulture at its nest, throat full, feeding a baby vulture and a self-portrait of Difronzo. The artist digests how even in death, at the end of things, life is still possible. 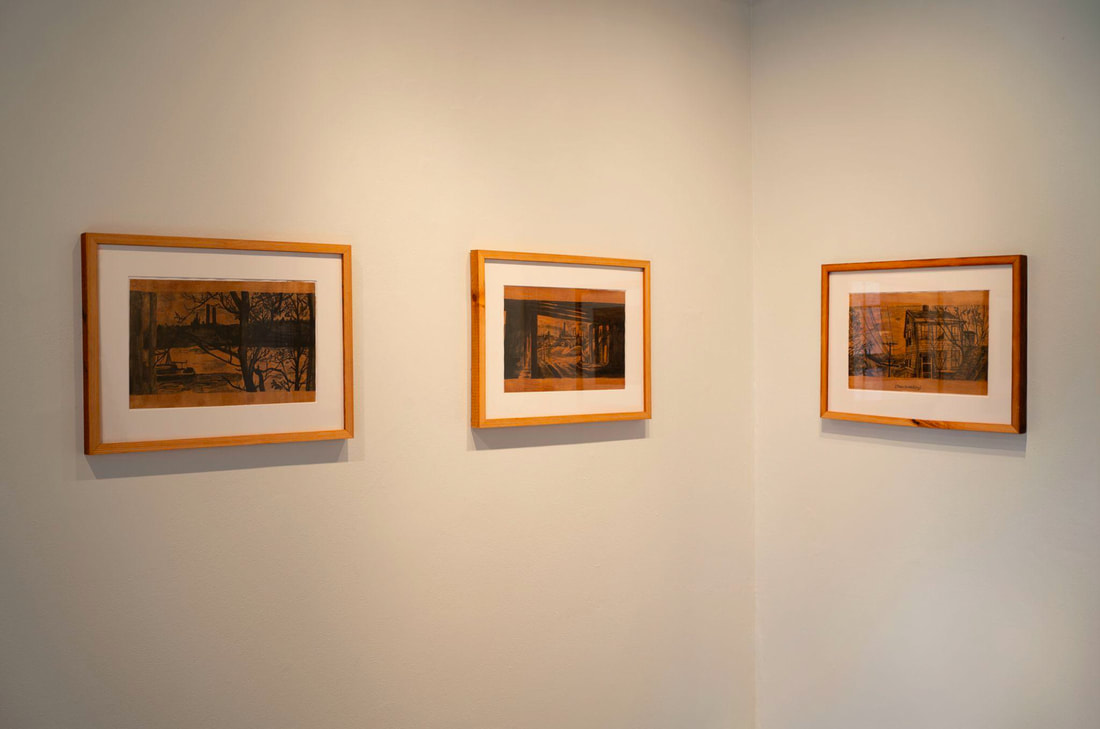 "One Shot (#2, #3, #4)" (2022), charcoal and pomegranate on paper
In today’s world, it is difficult to separate hunting from the masculine men who partake in the activity. For Difronzo, the film The Deer Hunter (1978) was the only reference they had for Pittsburgh’s landscape and its people prior to beginning their residency at Bunker Projects. This three-hour-and-three-minute movie follows a group of young adult men and their evolving friendship as they experience a wedding, deer hunt, and deployment to the Vietnam war. Most notably for Difronzo, the men only share their affection for one another through violence. Verbal insults, backslaps, bullying, finger-numbing handshakes, and constant roughhousing is the manner in which their intimacy is made visible or even offered. In nearly every scene. Almost every line.

Difronzo pulled four landscape images of Pittsburgh from the film and rendered each in charcoal on pomegranate-dyed paper. While the men and their quasi-closeness is absent from the drawings, their identical titles, One Shot (2022), shove the ultra-masculine energy back into every wooden frame. This title comes from Robert De Niro’s character, Mike, who declares that a hunter must take down a deer with only “one shot.” Any more is a failure — a failure of manhood, of course, not hunting.

Difronzo completes the exhibition with the most beguiling sculptures of bones, hooves, antlers, and Hamm’s beer cans — all made of dead dough. Dead dough, sometimes called salt dough, is deceivingly non-edible bread. The dough is considered dead because there is no yeast to metabolize the starches and sugars in the flour. Instead, the flour and water is overtaken by heaps of salt. Kept from developing its nutrients, the dead dough does not rise, but dries out in a low-degree oven. Prior to becoming essentially preserved, the dough is shaped with a razor, much like a baker scours the top of bread, and is coated with egg white to add that warm color to the hard crust. Regardless, these bread sculptures cannot offer any sustenance, even if they are in the shape of bones with deeply held marrow. And, those beer cans — Difronzo has emptied those, too. These sculptures make me reconsider what provides nourishment and what, despite appearances, does not.

"Marrow Altar" (2022), dead dough, local grasses and thistles
By surveying music alongside film, mythology, nature, food, and science, Difronzo draws a complex map to help untangle an emotional past. Their exhibition exposes how opposing dualities can become — complicatedly — one and the same. Soft and hard, feminine and masculine, care and violence, nourishment and decay, birth and death. The collapse of some of these seemingly contrasting attributes, like feminine and masculine, is beautiful and category-defying in ways the 21st century desperately needs. The collapse of care into violence, though, has always been and always will be dangerous, traumatic, and potentially fatal.
Sidney Mullis is a sculptor living and working in Pittsburgh, PA. She loves looking at and writing about contemporary art. Her artwork has been exhibited in a number of locations including Berlin, Tokyo, England, and Croatia. Solo shows include the Leslie Lohman Museum (NYC), Wick Gallery (NYC), Bunker Projects (Pittsburgh, PA), Neon Heater Gallery (OH), Bucknell University (PA), Rowan University (NJ), University of Mary Washington (VA), and more. She has been an artist-in-residence at The Children’s Museum of Pittsburgh, The Wassaic Project, Women’s Studio Workshop, MASS MoCA, Ox-Bow, among others. Her work has been featured in publications such as Hyperallergic, Young Space, Maake Magazine, De:Formal and Sculpture Magazine.
​Krystal DiFronzo's solo show, You were born good at make die, will be on view at Bunker Projects from April 1st - May 20th, 2022.