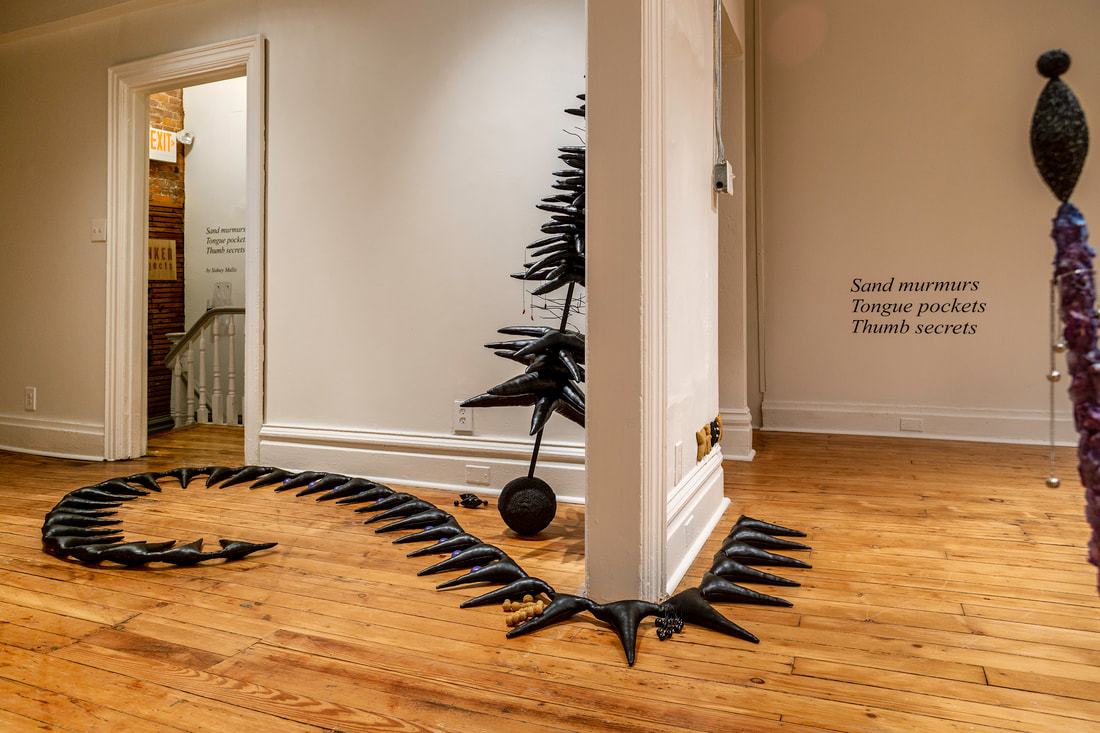 Like many other viewers of this exhibition, I experienced Sidney Mullis' solo show Sand Murmurs, Tongue Pockets, Thumb Secrets remotely. Writing about work I have only seen virtually is a first for me, but felt fitting given not only the circumstances, but the uncanny content of the show itself. Luckily, I am deeply familiar with Sidney’s work. Though I lament my lack of proximity to the material prowess hiding in every corner of the gallery, I appreciate the show’s reference to the current moment—a dream-like, otherworldly reality of never-ending virtual spaces to which we have all been forced to become accustomed.

The exhibition sprawls across two rooms, inviting viewers into the ‘parlor’ of the Bunker Projects gallery space with a neat trail of plump gingerbread cookie forms adhered to the wall above the baseboard moulding. Like hand-held dimensional symbols and oversized Teddy Graham bears, the objects evoke tempting edibles, constructed of foam and coated with a hardened coat of sand. Viewers are tempted into the main room by the deceitful treats, and like Hansel and Gretl, are confronted with the witch's house deep in the forest; the tree-like structure resembles an oversized beehive covered in playground sand, bedazzled with oil-slick shiny spheres, like black cherries thrust into an oversize ice cream cone. A crystal grid of smaller sculptures emanate from the structure, surrounded by meticulously formed elements—a skirt of spiky, sewn pleather wreathed by bone-like rainbows of hardened white clay, and handmade keychains. The scene recalls a lost temple or divine place of worship, the central silhouette pulling the viewer magnetically closer.

The presence of a large, black serpent, with sharp spikes softly sewn from stuffed pleather hugs the jutting corner of the wall and connects the two rooms in a coiled swoop. Small violet wax balls, glossy sperm-like tadpoles, and sand figures collect between its prongs—a mother dragon protecting her eggs, or guarding her prisoners. The most sinister of the sculptures, the snake, gestures to the penetrating darkness present in the work. While many of the objects evoke the innocence of childhood, the many modifications the materials endure leaves them with an unnerving quality. Objectively beautiful, they seduce the viewer with ease—but like the fairytale witch, they conceal a shadowy underbelly. 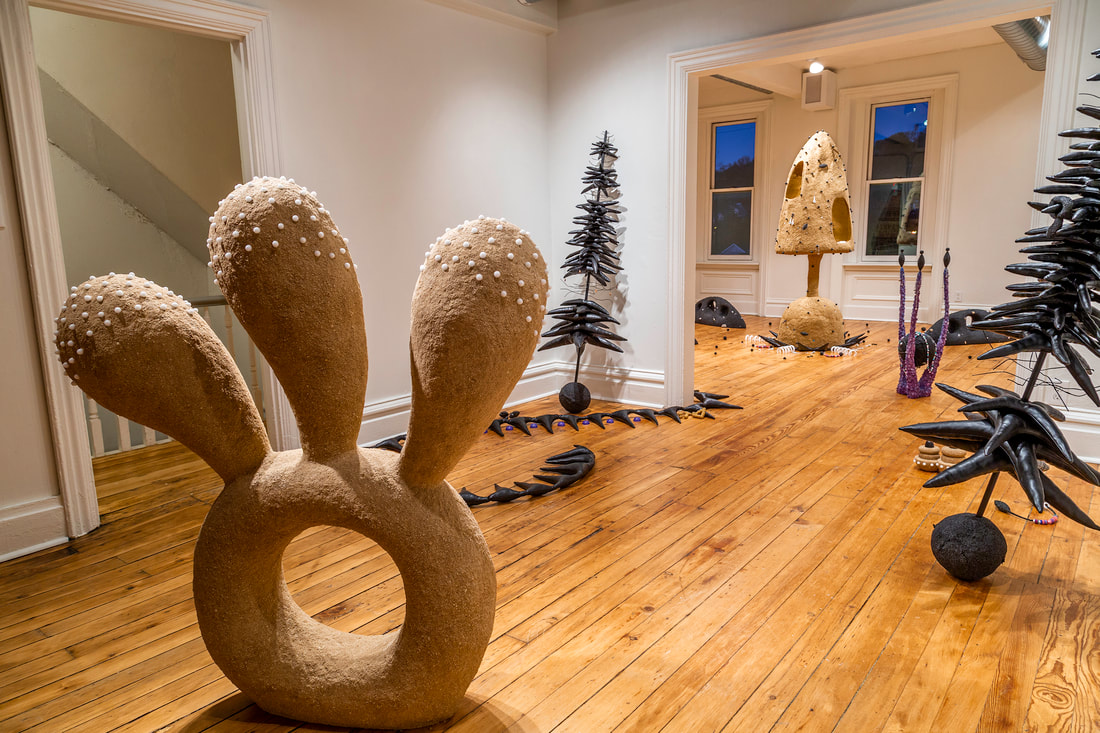 The room is still, the entities resting like venerable tombstones in a boneyard, sedate and quiet as time treads on. There is a jester coated in hardened purple clay and gravestone dust slurry festooned with beaded rosaries, a collection of small toys fit for a Tim Burton film, and a bead-embellished upholstered cushion worthy of presenting a poisoned apple.  Palpably sexual, the sculptures emanate a ripe desirability and flirtatious queerness. A set of decorated breast-like cones of sculpted sand, with hard wax nipples sits adjacent to a contraption that lies somewhere between a tween's headgear and a black-sand covered sex toy lovingly adorned with hand-cut paper confetti. The work straddles that inescapable adolescent zone of physical and mental development through a blend of overt icons and cute kids’ stuff. A pervading sense of duplicity hangs in the air—ripe with the innocent memories of a forsaken, nostalgic heart.

​Nearby, twin skewered stacks of pleather starfish pillows lean against the wall, like blackened Christmas trees. The objects form a ring around a sizable ceremonial figure like shrines in an ancient ruin—shaped in Mullis’ signatures style—like a Mickey Mouse-gloved hand waving hello. The gravelly surface—a mix of sand and glue perforated by matte wax nubs—highlights the artist's preference for unique materials and proprietary methodologies. The origins of Mullis’ work are deceptively simple—the mysterious homemade paper pulps, toxic resins, and molded wax commingle with store-bought craft supplies like jewelry chains, marbles, air dry clay, and bells—making the work feel both enigmatic, and plausible to buy a kit to make one’s own.