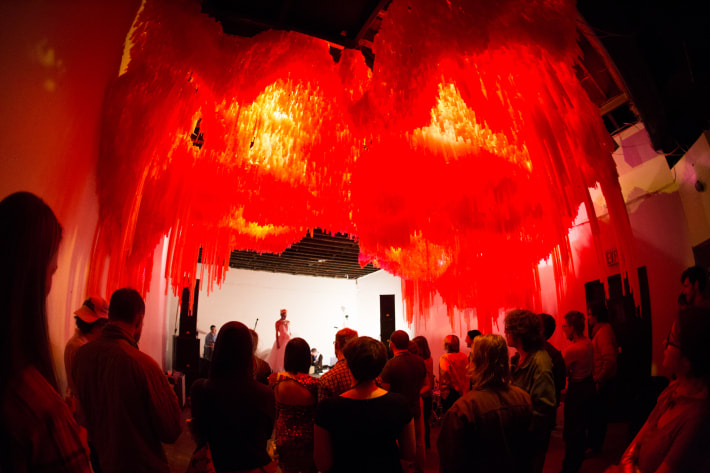 BLOOM BLOOM made by Dana Lynn Harper was the showpiece installation at BUNKER Projects Presents Benefit Exhibition in April 2013. Below is an interview with the artist, Dana [Interviewer: Jessie Rommelt].
JR:   This piece was shown in your MFA thesis exhibition in February 2013. Tell us briefly about your journey through grad school and how you arrived at BLOOM BLOOM.


DLH:      Graduate school felt like a dream.   As soon as I got started, I was finished. Before graduate school I had been making work out of my tiny bedroom, I didn't show my work, I didn't talk about my work, I just made it.  Graduate school was heaven, people listened to me, they cared about what I made and why.  I was forced to consider what was truly important to me.  I wanted to focus on joy, bliss and the sublime.  Not because I felt that women's issues were no longer important but because focusing on a deliverance out of suffrage allowed me to maintain my own happiness.  Celebrating the self and the connection with another is an alternate way to address and express ideas of feminism.  I began making genderless pairs of fantastic creatures that were made together, for each other. These pairs of newly invented animals adored one another, celebrating the moment of a first meeting, a first touch, taste and site.  I wanted to not only solidify and celebrate this moment of discovery and fulfillment but give this magic to the viewer.  The sculptures transformed into full environments, the first being BLOOM BLOOM.  These new places are seen as a stage for people to enjoy themselves and each other, to celebrate the here and now; allowing the outside world to melt away and the internal world to grow and connect to another.


JR:    Thinking about a sculptural work like BLOOM BLOOM as a stage is very different than static forms of viewership. People are most likely experiencing this piece while literally in motion or listening to live bands, quite a delightful set of stimuli.

JR: We know this piece has already manifested in two spaces, and I must say it's ability to be transported and installed was most impressive. I can state from experience that works of art are rarely as hardy as this one! So what's in store for BLOOM BLOOM? Will we be seeing it hovering above any joyful crowds in the near future? ( I feel as if we are talking about a young pop star's tour schedule)


DLH:    It does feel like a traveling circus or like I'm going on a musical tour, which has always been a secret dream of mine. I have spent the last two months coming up with a schedule of events/festivals that BLOOM BLOOM will attend.  The first festival is coming up at the end of June, Electric Forest.  The next is a show in Philly at Crane Arts called Novis Oculi, where it will be shown for 3 weeks in the month of July.  After that, Peach Music Festival in Scranton, Electric Zoo in Brooklyn and Pink Moon Festival in West Virginia.  I am constantly searching for new places to go, trying to build this lifestyle little by little.


JR:    Thanks Dana for sharing your thoughts and plans for the piece with us and keep us updated with images of the piece installed in the future!